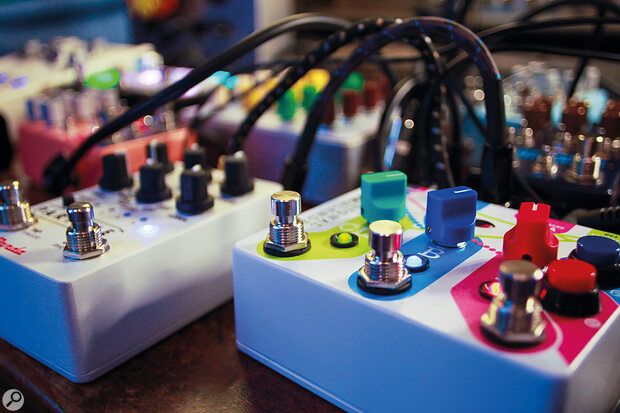 Parallel processing while mixing is a common technique — so why not try it with your pedals when recording?

Back in SOS April 2021, I wrote a feature about mixing with guitar pedals (https://sosm.ag/mixing-with-pedals), in which I covered both how to hook them up and some reasons why you might bother to do so, as well as offering some examples. In some respects, this article follows on from that one, although it applies just as much to finessing your guitar sound when recording as it does to mixing. It’s about the practicalities of applying to your guitar pedal chain some of the techniques we’ve all grown accustomed to when mixing in our software DAWs.

Most readers should, by now, be familiar with the idea of parallel processing while mixing. Basically, this is a technique whereby a signal path is split in two, and one path is then left untreated while the other is processed somehow, before the two are blended back together. Compressors and distortion/saturation processors are often used in this way, an approach which can raise low‑level details and/or add some colour to the sound while still retaining a sense of clarity — because whatever processing is applied, the transients in the dry signal emerge unscathed.

Other than using a wet/dry mix control on individual pedals, though, guitarists tend to shy away from this tactic, presumably because it’s rather easier to set up the routing in software or on a mixing desk than it is on a pedalboard. Recently, though, I’ve been experimenting with ways to apply parallel processing techniques to my own pedal chain when I’m recording guitars. Initially, I was searching for a certain overdrive tone and just couldn’t seem to achieve it with the effects I had to hand — a couple of pedals offered some nice characteristics but, when arranged in series, they either delivered too much drive or felt unbalanced — and I really wanted to dial in aspects of each pedal’s sound without them influencing each other’s behaviour. So I started to look at ways that I might combine the desirable aspects of the two by arranging them in parallel and, after meeting with success, I soon started to investigate other possibilities.

There are various products available for hooking up pedals in parallel and I started my experiments with an Old Blood Noise Endeavours Signal Blender. This is a simple but high‑quality device with a Clean channel and two send/return loops, labelled A and B. Each of the three channels has an on/bypass footswitch and level control, and each loop has its own polarity control. So it’s really easy to audition or drop out specific pedals on the fly, and to set the desired balance. It’s also pretty reasonably priced (£125$129). 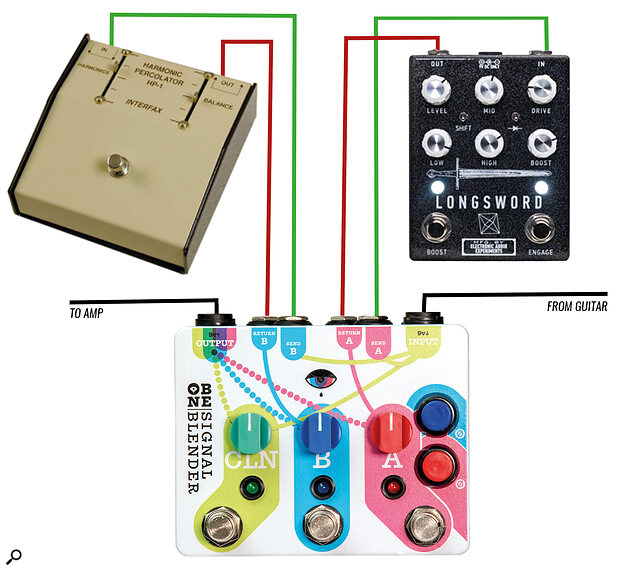 The Signal Blender was perfect for executing my initial idea of blending two overdrives: I wanted to balance the thick, low mids from my Electronic Audio Experiments Longsword pedal with the sharper top end of the Interfax Harmonic Percolator. Setting this up with the Signal Blender was quick and easy. On each loop, you simply connect the Send to the input of the pedal and the Return to its output. With that done, I could bring up the volume of both pedals, check for the best polarity relationship, and then blend to taste using the Signal Blender’s pots. I really liked that once I’d set the desired balanced between the two, I could blend in the original clean signal to taste, to restore some of the sense of clarity which can often be lost in a heavily distorted signal such as this.

Running the two pedals in parallel gave me access to so many different tones, not least because the Longsword has an onboard EQ facility; in a parallel configuration you can shape your signal with EQ much more assertively than when the effects are connected in series. An example, in this particular implementation, is that I was able to crank the Mids control all the way up without influencing the behaviour of the Harmonic Percolator, which carried on contributing its ‘top‑end clang’ thing, just as I wanted.

My positive experiences with distortion had me dreaming of the other possibilities opened up by running stompboxes in parallel. Using the Signal Blender once again, I soon tried setting up two analogue delay pedals: an Electronic Audio Experiments Sending and an Asheville Music Tools ADG‑1. When you run delay pedals in series, they obviously have a huge influence on each other, with one applying delay to whatever comes out of the other — usually, in a guitar chain, a blend of the dry signal and the delays. This can be a great sound in its own right but in this case I wanted to create a different effect, with clear, definite delay trails at differing times, similar to the sort of thing you could achieve by using multiple aux send effects when mixing.

Running the two delay pedals in parallel allowed me to achieve this, with a quarter‑note feel on the Sending pedal and a dotted‑eighth note on the ADG‑1. Success! The blended result was a much ‘clearer’ sound than when running them in series. As with the EQ on the Longsword, it’s always worth thinking about what pedals can do beyond their main purpose (in this case delays) and with these pedals I found I was able to drive their preamp stages to different degrees, opening up even more tonal options. Driving the input of the Sending while keeping the ADG‑1 cleaner became a favourite tactic.

While I’d enjoyed significant success with the Signal Blender, it wasn’t long before I decided that it would be worth diving in deeper: I wanted access to more loops, and to have more options for interactivity between them.

With that in mind, I started to look for other gadgets that might help and this led me to the Pladask Elektrisk Matrise ($300). Conceptually, this is a fairly simple device — a matrix mixer pedal with four I/O, each with its own polarity switch, and with 16 pots on the top that you use to route your signal between the loops. But it’s a hugely flexible routing system that gives you immense freedom to tweak your tone. Obviously, the four inputs mean you can run up to three pedals in parallel with the dry signal. But you also have access to cross‑modulation and the ability to change signal paths on the fly, and to create feedback loops.

I was able to use the Matrise to feed a distortion pedal back into itself at certain points in a song. This created some heinous but wonderful, deteriorating sounds.

As a producer, having access to this kind of flexibility can be really helpful when trying to create interesting sounds during a performance. For example, whilst recording some heavy guitar riffs for a recent project, I was able to use the Matrise to feed a distortion pedal back into itself at certain points in a song. This created some heinous but wonderful, deteriorating sounds — textures that are only achievable using this method. You needn’t limit yourself to distortion here. Feeding some of the signal from reverb, delay and modulation pedals back to their inputs can be a lot of fun. I also found some very strange but fun sounds when feeding the output of an Earthquaker Devices Rainbow Machine (a digital pitch‑shift stompbox) back into itself.

I’ve found that every pedal reacts differently to having its signal fed back to its input. There’s definitely a lot of fun to be had, experimenting to find the gems, but as the sound can get very loud very quickly do tread with caution!

The Matrise also has plenty to offer when you’re working with stereo signals and while you could keep things simple and route a mono pedal to two outputs, it’s way more fun to experiment. For instance, using the Matrise’s routing matrix, you can effectively pan effects or create movement. 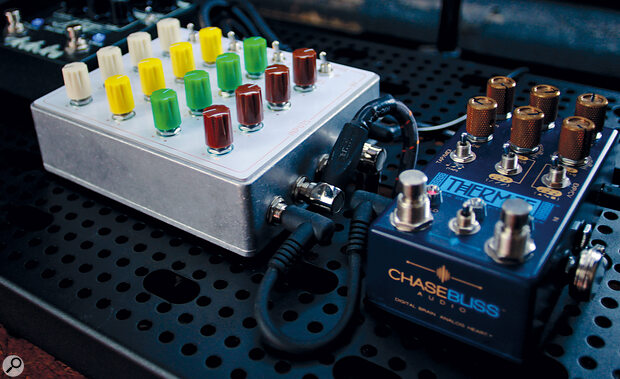 The Pladask Elektrisk Matrise, configured to run the Asheville Music Tools ADG‑1 and Chase Bliss Audio Thermae delay pedals in parallel, with a little of the output of each feeding into the other.

In one setup, I created a moving pair of delays that interacted with each other to enhance the stereo image. Loop 1 and 2 were used as outputs to different amplifiers. Loop 3 was connected to an Asheville Music Tools ADG‑1 analogue delay (with its modulation bypassed) and Loop 4 was connected to a Chase Bliss Audio Thermae, another analogue delay, but with pitch‑shifting applied to the repeats (in this case a fifth and an octave). I set both pedals to 100 percent wet, since the dry output was already coming out of 1 and 2 (ie. my left and right signals), and routed the ADG‑1 to come out of the left channel and the Thermae from the right. However, I also routed some of the Thermae’s output to the ADG‑1 and vice versa. With both mono delays feeding into each other, the result was an evolving swell of pitch‑shifted delays. Set the feedback to taste, and you have a really interesting effect that can be blended with the dry signal, to create a deliciously washy stereo ‘ambience’.

Not every combination will sound amazing, of course, but that’s the fun of this technique. It’s all about experimentation and, as a producer who always endeavours to get things sounding as finished as possible at the tracking stage, I find the flexibility this approach brings really inspiring.

Blending effects pedals can also be very handy while tracking bass guitar. Often, I find that putting a fuzz or distortion in series on bass can be too much and, while this effect can often be added in the mixing stage (particularly if you’ve captured a DI signal), I’ve started to blend in my fuzzes and distortions in parallel while tracking. This not only creates a slightly different sound, but it also saves me a job down the line and I find that it can influence the artist to perform differently. Compression and saturation could also be great candidates for parallel processing on bass, and while chorus and phaser pedals do typically have a wet/dry control already, this sort of routing could open up more options for them too.