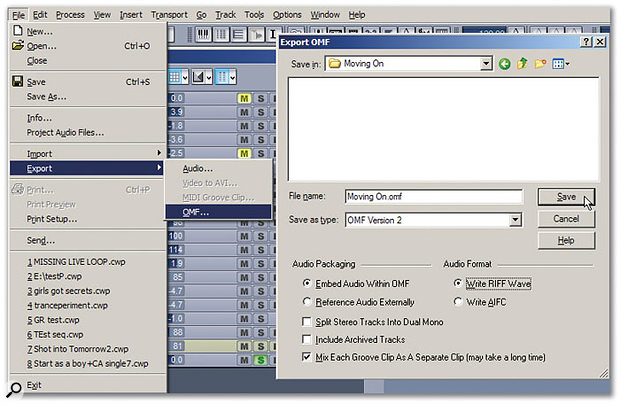 The export process is quite straightforward. Just remember that OMF deals only with audio tracks, so you'll need to export MIDI data separately.

We explain how to transfer projects between DAWs that speak OMF, and look at some clever envelope tricks.

You work with Sonar, but your keyboard player uses Cubase SX and you want to collaborate. So you go through the tedious process of rendering all your soft synths as hard disk tracks, saving each audio file as a WAV that starts at the beginning of the song, then saving a standard MIDI file for any MIDI parts.

But wait! It doesn't have to be quite that complex, thanks to OMF (Open Media Format). Sonar can export all its audio information as a single OMF file, which other OMF-compatible applications can then import. In the process, the target program recreates the same project, puts all the audio files along the timeline in the proper order, and even grabs the correct track names.

The Magic Of OMF

This process works very well, but there are a few cautions. First, OMF deals only with audio tracks — not MIDI, soft synths or plug-ins. You'll need to render any soft synth tracks to hard disk audio files, and if you're using MIDI tracks they'll have to be exported separately as Standard MIDI Files and imported into the target program. OMF also doesn't deal with plug-ins, so you've three options:

Once you have the situation with soft synths and plug-ins sorted, it's time to export. Go File / Export / OMF, to bring up a window with a variety of options. You can save as OMF Version 1 or OMF Version 2, but I found that Version 2 worked and Version 1 didn't, so go with Version 2. Next, choose your Audio Packaging. It's most convenient to embed the audio within OMF, as that creates a single, simple file with everything you need — rather like Sonar 's Bundle format. If you choose 'Reference Audio Externally', that creates a separate folder containing the audio that the OMF file references.

Tick 'Include Archived Tracks' to include tracks within the project that are archived, and if you use Groove Clips, I suggest ticking 'Mix Each Groove Clip as a Separate Clip'. For Audio Format, I usually tick WAV, unless there's a compelling reason not to — for example, if you're trying to export to a Mac program that doesn't understand WAV files (which is unlikely).

When you click on 'Save', Sonar commences processing. After watching various progress bars fly across the bottom of the screen, you eventually end up with your OMF file.

Importing, at least with Cubase SX, is simple, and most other programs follow a similar protocol. Just go Import / OMF, navigate to your OMF file and click on 'Open'. You'll see your project tracks sitting just as they should, with their proper names. Isn't technology wonderful?

Like most other hosts, Sonar uses envelopes for automation. You can either draw these 'from scratch' or create them by arming parameters for automation and moving their associated controls. These motions are translated into envelopes, which control the parameters on playback.

As to which is preferable, it depends on your application. When envelopes are used to create time-related effects (for example, volume changes that occur on the beat), you can generate far more precise envelopes by drawing them in. But if you're going for something like expression or volume changes, you probably want to do these in real time to capture the desired 'feel'.

Double-clicking on an envelope creates a 'node'; you can click on it and drag it to the desired level and place on the timeline. But you can also change the shape of the segment between nodes, which is quite cool.

Right-click on the line between two nodes and you'll see a menu offering four curve options: Jump, Linear, Fast Curve (concave shape), and Slow Curve (convex shape). All of these are fairly obvious, except Jump: it means that the level stays at the first node's value until the Now line traverses the second node, at which point the value jumps abruptly to that of the second node. I find this option very useful for creating 'sample and hold'-type effects when applying the envelope to filter cutoff. Just place nodes at the desired rhythmic points (note that you can snap notes to rhythmic values), drag them around to various values, and select the Jump slope.

As working with individual nodes can get tedious, Sonar offers several tools that allow you to edit groups of nodes, or portions of an envelope. The simplest of these is as follows: click on the envelope segment between two nodes, then drag to raise or lower the level of both nodes simultaneously. To edit multiple segments, shift-click on additional nodes. If they're all contiguous, clicking on any of the segments will raise or lower all the curves between these nodes.

However, you can also shift-click to select non-contiguous segments. For example, if you shift-click on two nodes at the ends of one segment, then shift-click on two more nodes at the ends of another segment, raising or lowering one will raise or lower the other, even if they're not adjoining. There's also a faster way than shift-clicking to select contiguous nodes: click and drag the cursor in the timeline above the envelope. When you release the mouse button, all nodes within that region (for the track that has the focus) will be selected.

Deleting nodes is simple: you just click on a node (or shift-click on multiple nodes) and then hit the keyboard's Delete key. It's also possible to right-click on a node and select 'Delete Node', but note that this affects only the one node on which you right-clicked, not all that are selected.

It's possible to copy and paste envelopes independently of any other track parameters; we discussed this in the May 2004 Sonar Notes, in response to a reader query about how to have the exact same envelope on two different tracks. Briefly, you copy a track by selecting it, right-clicking on a Clip or empty space in the track and choosing 'Copy' (make sure all boxes are unticked except for Track/Buss automation), then clicking 'OK'. You then paste the envelope where desired. 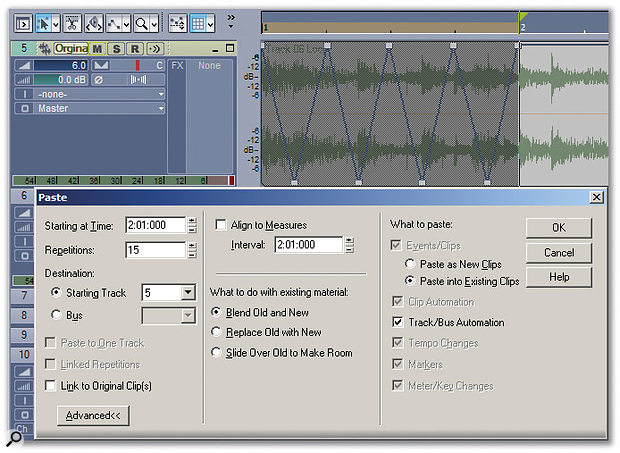 Here a periodic tremolo envelope has been drawn for one measure, then copied, and is about to be pasted to cover 15 additional measures.

Clip Envelopes can also be copied and pasted independently of, or along with, track envelopes. For example, suppose there's a Clip with a Gain envelope and a track envelope for Pan that passes over the Clip. If you right-click on the Clip and select 'Copy', you can tick 'Clip Automation' as well as (or instead of) 'Track/Bus Automation'. Then, when you paste, both envelopes will be pasted. However, note that if you select Clip Automation, the Clip itself will be copied too (as indicated by the 'Events in Tracks' box being automatically checked). This makes sense; you can't expect Sonar to copy a Clip envelope unless there's a Clip involved.

As a Clip envelope is often an integral part of the Clip, you probably don't want to go through the hassle of doing a multi-step cut and paste — especially since there's a tool designed expressly for this purpose.

Go to the Track view Toolbar, click on the downward-pointing arrow next to the cursor icon (second from the left), and choose 'Select Track Envelopes with Selected Clips'. Now when you copy and paste Clips, any associated envelopes will go along for the ride. (As with the standard envelope-copying procedure, you can choose whether to copy/paste Clip Automation, Track Automation, or both).

I've often enjoyed the Cubase feature that lets you draw envelopes with repetitive waveforms — just the thing for tempo-sync'd effects such as tremolo. Sonar doesn't have this feature per se, but you can come close using the advanced Paste features.

You'll need to draw one complete cycle of the repetitive-envelope-to-be, and copy it. But when you go to paste it, make sure the Paste Advanced dialogue is showing. Here you can specify a particular number of repetitions (as well as where you want the envelope to start, if somewhere other than the current cursor position, and whether it will replace an envelope or slide it to the right to make room for the new one). You can even almost 'morph' two envelopes together, if you paste an envelope into a track that already has an envelope of the same type and select 'Blend Old with New' as the paste option. See the screen above,

Sonar overlays all track envelopes in the same track. This has advantages and disadvantages: It makes the overall workspace less cluttered (seemingly a Cakewalk design goal), but makes the individual tracks more cluttered if there are a lot of envelopes.

Fortunately, there are several show/hide options. The most basic one is to right-click on an envelope and select 'Hide Envelope' (logical enough). But you can also right-click on the track itself and go Envelopes / Show Track Envelopes. From here, you can untick envelopes you want to hide. To show them again, follow the same path but this time, tick them.