You might consider the REX file to be just another format on the list of audio import options, but it can actually be used to achieve some very creative results. We take a look at what's possible. 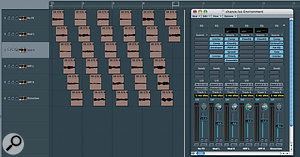 Having absolute control over every parameter in a project is obviously one of the enticements that a DAW's workflow can provide. However, it is sometimes nice to have an element of chance involved in the creative process.

Collaborating with other musicians can provide such a creative spark, through the collision of divergent ideas, but what can you do to introduce chance when working alone? Is there a digital substitute?

When working with tempo-adjusting rhythm tracks, musicians routinely turn to 'smart' loops such as Acid files or Apple Loops, which automatically follow the DAW's sequencer tempo. However, one should not forget about one of the first formats in this area, the REX (.rex or .rx2) file. REX files are created using Propellerhead's' Recycle software, in which markers are added to a pre-truncated audio segment, typically highlighting the transient points. This creates sub-regions (sometimes referred to as 'slices') in the file, allowing for some interesting attack and release modulation effects for each slice and, ultimately, an unpredictable stage in the creative workflow. After you tell Recycle how many bars and beats you want the loop to have, the root tempo is automatically calculated. Then, once the file is exported, DAWs (and other music production programs that can use REX files) utilise the embedded metadata to allow time expansion or time compression, as well as re-quantisation of the audio regions.

Of course, there are many sample libraries available (both commercial and free), so you can cut to the chase by using REX files already made for you.

Employing REX files in Logic Pro gives you a lot of flexibility in how the audio will be handled within the program. You can add a REX file to Logic in one of two ways: either choose Import Audio File from the main Audio menu, and then choose the desired REX file from the Open/Save dialogue box; or drag and drop files into Logic 's Arrange window from any open Finder window. Curiously, though, using the Add Audio File command from the Audio Window's local File menu (a common procedure when adding all other types of audio to a project) does not work for this type of file, and any REX files in the Open/Save dialogue will be greyed out.

The five Fix Methods are quite cryptic, so here's a run-down of what they actually do:

Logic can handle the slices of a REX file in five ways, using the choices in the Fix Method menu of the Recycle File Import window.

* Don't Fix: Makes no changes. If the slices (audio regions) overlap, Logic Pro 's usual rules for audio on a track will apply, whereby audio from later regions has priority over earlier regions, resulting in the 'newest' audio region being heard. Depending on the tempo and texture of your song sequence, the use of this method could be either very cool-sounding or the worst thing in the world; experiment!

* Crossfade: Applies a non-destructive, equal-powered crossfade edit to each overlapping region, making overlaps blend into each other for a smoother feel. Below the Fix Method drop-down menu in the dialogue window is the Crossfade Length parameter, which allows you to set the total length of the crossfade in milliseconds.

* Add Tracks: Creates additional audio tracks and moves the slices to them. This allows each slice to play at its full length, since the regions never collide in this mode. While the dialogue says 'add' tracks, it will use pre-existing neighbouring audio channels if they are not being used. It will only create them if there are no other audio channels in the Arrange window. The Add Tracks option is employed in the main screenshot, left.

* Render into single file: Merges the slices into one audio file, using the current sequence tempo, then uses that file in the Arrange window. Selecting this option makes the audio 'dumb', so future tempo changes will cause it to be out of time. (Unless Follow Tempo is being used: see below.)

* Render into Apple Loop: This is really useful, as you can convert your entire collection to Apple Loops as needed. While both REX files and Apple Loops will follow tempo changes, the latter respond to key changes (automated transpositions based on the song's key) as well; REX files don't.

Once a REX file is imported, it will show up in the Arrange window as a region in a condensed folder form (above). Double-clicking on this folder lets you 'open up' the REX file, to view its component parts, as shown in the main picture, left.While each choice has its pros and cons, the one that can offer the most surprises is the Add Tracks option. Since all slices are placed on different tracks — depending on the REX file's root tempo, the sequence of your song file, and how many channels you requested when importing the file — you get the ability to pan and add inserts (and sends) to individual slices or groups of slices. Logic 's track presets can really come into their own here, and it doesn't take long to get some great results. The outcome of the organisation of the slices and variety of interesting and easy-to-muster effects makes your project take on a random character (it's not truly random, but it's almost impossible to predict exactly what will happen). This can lead to many happy accidents. However, for those who want to revert to former states, it is not hard to reposition the slices on specific tracks as desired.

After you click OK in the Recycle File Import dialogue, Logic Pro will bring the REX file into your project and (if you dragged the file into the Arrange window) place a folder on the first of the audio tracks (see the screen shot in the centre of this page). If you open your Audio window, you will notice that, along with a full-length audio region, the program also created audio regions for each marker that was embedded in the file.

You can open the folder by double-clicking on the object. Once inside, you'll find how Logic distributed the slices across the tracks.

The Follow Tempo function was new in version 7.1 of Logic. As its name suggests, it allows any audio to follow the tempo of the song (as long as it was created in version 7.1 or later), and even responds to tempo changes. The tick-box that engages Follow Tempo is found in the left-hand parameter box of the Arrange page, when an audio region is selected. Using Apple, Acid ised or REX loops is a very versatile way to create tempo modulations over an entire project, as their tempo is automatically sync'd to the host. However, one should not overlook the built-in Follow Tempo function, available since the v7.1 release of Logic Pro. The Follow Tempo tick-box is accessible in an audio sequence object's parameter box, in the upper-left part of the Arrange window. All audio objects that are recorded into Logic v7.1 and above will have this option available. Once checked, it allows audio to follow tempo changes in real time without any pitch-shifting. The algorithm used is very smooth when tempo-modulated by moderate amounts. There are no 'stepping' artifacts during automated accelerandi (getting faster) or ritardandi (getting slower), making Follow Tempo a very effective tool.

This feature can be added to audio recorded on versions of Logic prior to 7.1 by exporting the track as audio (via the File / Export / Track as Audio File command) and then re-importing the rendered audio back into the project. The value of having this amount of tempo flexibility available with digital audio cannot be overstated; it will allow you to push forward or pull back the tempo after the project has been recorded. Very clever!

Now comes the interesting part. While you can tell Logic how many tracks you want your REX file to be distributed across, the actual placement of the individual slices within the REX file is out of your control. Again, although this is not an actual 'random' process, the chance that you'll be able to foresee or calculate the resulting slice-to-track assignments, based on all the parameters involved, is very small.

Assuming there are six tracks containing the slices for the loop, you could try panning two of them far left and far right, while inserting EQs with different settings on each one. You may find that distortion from Guitar Amp Pro works well to add some not-so-subtle flavour, but it could be considered overkill!

Remember to regularly evaluate the groove and see if your settings have yielded any sonic wonders. You might find that your first selections will influence what remaining parameter and effect changes are made; other times your choices may prove uninspiring. In the latter case, it's very easy to re-pan (or de-pan) the sounds, change effects, and add bus effects, such as delay or reverbs for effect. Sometimes, randomly changing which regions are contained on the various tracks can bypass any creative roadblocks.

Also remember that, if you want to retain some control, you can automate any available parameter over time. Perhaps a little high shelf in the chorus on track two? Maybe slowly pan the regions on track four across the stereo image, leaving other slices alone?

Using some of these techniques, not only do you gain a new source of inspiration, you get an easy way to manipulate the REX file's sonic presentation.