Tape Delay In Your DAW

Second–hand tape recorders are cheap and can provide uniquely warm, organic delay effects. Best of all, it’s a piece of cake to integrate them into a digital mixing setup. We tell you how... 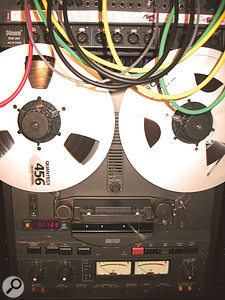 You should be able to obtain a vintage two–track tape recorder such as this Otari for relatively little money.Legend has it that Sun Studios owner Sam Phillips stumbled upon the technique of creating echo effects using a reel–to–reel recorder by mistake. Whether or not he was the first recording engineer ever to produce this effect, it is safe to say that his studio made the sound famous. Scotty Moore, Elvis Presley’s electric guitar player, liked the sound so much that he even had an echo device built into his guitar amp, so that his echo sound was not just an effect, but an integrated part of the guitar sound. When Elvis moved on to RCA, the RCA studio engineers used this same technique on his hit songs of the time.

The character and depth of sound that was produced from tape echo on these old records is extremely lush, warm and wide, and although recording studio technology has changed so much since the ‘50s, some of the biggest–sounding records being mixed today still use this classic technique. In this article, I’ll be explaining how to integrate a real tape–based delay into a digital mixing setup.

Before we get to the mechanics behind actually creating that beautiful lush echo effect, you’ll need a tape machine. For tape delay you have two avenues to choose from: use a dedicated echo device such as a vintage Echoplex or Copicat, or use a three-head reel–to–reel tape machine. Dedicated echo devices will give you more delay–time options, because most units have variable playback head locations, but these vintage units are relatively expensive and hard to find in good working order. Also, some require proprietary tape cartridges that are difficult to locate. For these reasons, I’ll concentrate on how to achieve echo effects using conventional mono or stereo reel–to–reel tape machines. These give you fewer options for delay settings, but are very reliable and do not require dedicated tape cartridges.

You will require a three–head tape machine — in other words, one with separate erase, record and playback heads. I recommend a quarter–inch two–track machine that can run at either 7.5 or 15 inches per second. You should be able to find a decent used machine that works well and is great for echo for around £150–250. My dedicated tape echo machine is an Otari MX BIII, which I bought for £150 from my local university radio station. You may find some much cheaper, if you don’t mind them being in less than perfect cosmetic condition. You’ll also need some quarter–inch analogue tape, but this is relatively cheap compared to two–inch and other multitrack tape sizes. You may even score some used tape with your machine purchase.

Using a tape echo as an external effect in Pro Tools: the Echo bus contains an insert called A6, which is routed out of the HD interface, through the tape recorder and back again.When you’re using a tape machine only for tape echo effects, it doesn’t require perfect calibration. Inconsistencies with EQ and playback reproduction are, to a certain extent, what you are looking for when it comes to delay sound, because they help to give tape delay its unique character. Every tape recorder sounds slightly different, whereas the same two plug–ins sound identical. A little wow and flutter is what you want, and as long as the machine records, erases and reproduces signal properly, you are in business. The only maintenance required will be to clean the heads periodically with alcohol and demagnetise them.

Setting Up Your Tape Recorder

The idea behind getting a tape echo effect to work is quite simple. Most tape recorders have a switch allowing you to monitor either the signal that has actually been recorded to tape, or the source input. When you are monitoring in Tape mode, there is a slight time delay between input and output, because it takes time for the tape to pass from the record head to the playback head. Tape echo is achieved by routing the source signal from your DAW to the tape recorder, monitoring it in Tape mode, and mixing this delayed signal back into the mix bus on your DAW. I am an avid Pro Tools user, so I will illustrate how to go about this operation in Pro Tools, but the concept is the same in all digital systems. As long as you can route analogue signals to and from your DAW, you should be able to use tape echo. 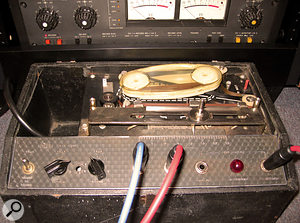 The Echoplex is one of many classic tape–based delay units that now command high secondhand prices.

First off, I create an auxiliary track (mono for most cases) and label that track ‘Echo’. I then bus a post–fader or pre–fader send to that auxiliary track’s input. My tape machine’s inputs and outputs are connected to an analogue patchbay, which is also wired to my Pro Tools HD192’s analogue inputs and outputs. I use an analogue insert on the auxiliary track’s signal path to route that track to and from the tape machine. That’s basically it! Now all you have to do is press Record and Play on your tape machine and you will have a delayed signal appearing on your auxiliary track. Just make sure that you are monitoring Tape on your tape machine and not Source, or you will be hearing just the latency from your DAW converters and not the actual tape echo! Make basic level adjustments and you are off to the races.

The slower the tape speed setting on your machine, the longer the delay time. I find that for a lot of tunes the 7.5ips delay time is magical, but for faster groove–orientated material, the 15ips speed gives a tighter delay time. Although you are limited to these two delay times, there are lots of ways to carve your sound to give the delay a character that is really cool and unique. This is where you can get experimental. Because your echo effect track is on an auxiliary fader that is output to your main mix bus, you will have full creative control over how you want to further enhance the effect’s sound. Compress the track, EQ it, route that delay to the tape machine’s other channel, use reverb... The options are endless. You can also add other plug–in effects. One of my favourite effects is distorted echo, which I achieve by overdriving the tape machine’s line inputs to get a lovely saturated delay sound. Also, experiment with panning and overall level automation for different parts of the song. Tape selection also changes the sound of your delay. You may want to invest in some high–quality reels, but it’s not essential. Whatever type of tape you choose, each reel will last numerous spins. Don’t throw away all of your degenerated tapes, either: you might just want a really gritty delay sound for certain applications.

If you can find vintage echo units that work, like Michael Brauer’s collection, you are very lucky, so take care of these devices. Fortunately there are lots of reel–to–reel tape machines still available for your echo needs, but in 20 years or so this may not be the case. Get your hands on one now, and get the benefits of a dedicated tape echo machine without the cost, by taking advantage of a used tape machine and making it your own dedicated echo tool.

The famous WEM Copicat tape echo unit is still being manufactured by Charlie Watkins, at a list price of £745, while the Fulltone Tube Tape Echo device (£610) is another interesting purchase.

Michael Brauer’s rack of tape delay devices.Master mixer Michael Brauer, whose credits include Coldplay, the Rolling Stones, Bob Dylan and Paul McCartney, is one of the most passionate advocates of tape delay in modern music. Brauer does not mix ‘in the box’ and uses dedicated echo machines rather than reel–to–reel tape machines, including the MeazzI Echomatic, Big Briar Moogerfooger analogue delay, Binson Echorec 2, Roland RE201 Space Echo, the new Fulltone Tube Echo, Watkins Copicat, Dynachord Echochord S65 and the Swiss Echo. Each unit incorporates selectable delay times and other adjustable settings. Brauer says that each of these vintage tape echo units delivers a different flavour when it comes to the tone of the echoes. Some sound warmer and fatter than others, while others sound grainy and lo–fi, all of which serve a purpose for diverse mixing situations. The MeazzI and Binson models, for instance, were his main source of delays for the electric guitars on Coldplay’s X&Y. Michael Brauer’s collection of dedicated tape echo devices, and also lots of other cool outboard gear, can be seen on his web site under the heading ‘Soundtowers’.