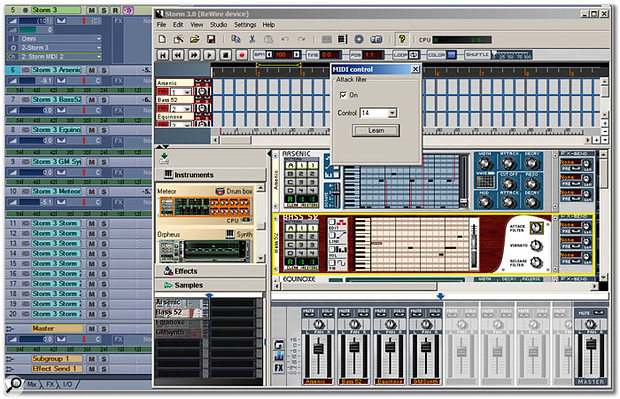 In this song, five Storm synths have been loaded into Sonar, each driven by a different MIDI channel and having its own audio output in Sonar 's mixer. One of the instrument knobs is about to be tied to a MIDI controller via the 'MIDI Control' box.

We bring you yet more Sonar stratagems, including further adventures in envelope copying, some handy track tricks, and advice on using Arturia's Storm with Sonar.

Back in Sonar Notes April 2003, we covered using Arturia's Storm 2 as a cost-effective VST instrument rack for Sonar. Now Storm 3 is out, and although it costs a little more it now makes an even better Sonar accessory and also requires less CPU power than its predecessor.

Storm 3 is Rewire 2 compatible, so there's no longer any need to use it as a VST instrument, because it has full MIDI functionality under Rewire. Insert it as a Rewire client, and Storm 3 can become an instrument expansion rack, a 'groove' pattern sequencer that plays along with Sonar, or a pattern generator that you can convert into audio tracks within Sonar. For now, let's look at the expansion rack possibilities.

Upon going Insert / Rewire Device / Storm 3, if you tick 'All Synth Outputs' in the dialogue box that appears, 32 stereo channels will be added to Sonar 's mixer. Within Storm 3, the Settings / Audio Connections box lets you assign outputs from individual Storm instruments to the desired Sonar channels. (If you don't need individual outs, you can, of course, tick 'First Synth Output', which adds only the two channels from Storm 's master outs.)

When you play MIDI data into Sonar, Rewire directs that data to Storm. In Storm 's sequencer, you can enable MIDI for each instrument individually, as well as set channels. Typically, I set each instrument to a different channel and reassign the output channel of the Sonar MIDI track driving Storm to trigger a particular instrument. If a lot of instruments are involved, it's less confusing to create a separate MIDI track for each instrument, especially if you're adding automation.

Speaking of automation, an outstanding MIDI feature is Storm 's 'Learn' function, which lets you tie parameters to controllers. Just Ctrl-click on a knob in Storm, click on 'Learn', and tweak the controller you want to use. If desired, you can record this as MIDI automation, which will drive the parameter on playback.

One caution, if you're using Storm solely as an expansion rack of sound generators, is that you should clear the current pattern in whatever instrument(s) you're using. Storm is a very groove-orientated device, so as soon as you press play in either Sonar or Storm, Storm will start playing the preset patterns stored in whatever instruments have been loaded into the Storm 'rack'. However, this can also be a handy feature if you want to have some patterns going in the background as a reference.

After I described in detail, two issues ago, how to copy envelopes in Sonar, a couple of readers asked for some examples of why one would use a 'copy envelope' function. Fair enough: one example that springs to mind is a time when I recorded a lead vocal and used a level envelope to get rid of noise between phrases. I later decided to double the vocal (not just clone it, in order to get a more interesting sound). I copied the old level envelope to the new vocal, and it did a great job of cleaning up the new track — I needed to make only a few small tweaks, which was better than starting again from scratch. 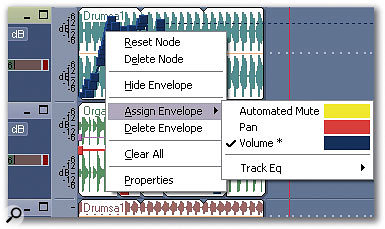 It's possible to assign an existing envelope to a different parameter.

To give another example, I had recorded two rhythm guitar parts playing power chords in opposite channels. I wanted to add some rhythmic 'chopping' effects, so I did that for four measures on one of the tracks, then copied the envelope to other parts in the track where it would sound good. Then I copied the same pattern, but offset by an eighth note, into the other channel, so that there was an interesting panning/chopping effect. So yes, being able to copy envelopes has its uses.

Perhaps Cakewalk's engineers have too much time on their hands! Actually, the ability to assign an envelope to something else can be useful. I once used the Project 5 Tempo Delay plug-in for a track, and automated the feedback amount so that certain notes would have lots of echoes, but others wouldn't. During mixdown, I decided that that more delay lines were in order, so that I could have separate delay times in the left and right channels. So I deleted the Tempo Delay and inserted the Cakewalk FxDelay, which includes four delay lines. I wanted to use two of them, and apply the same feedback envelope to each.

After you've recorded the automation envelope, right-click on the envelope, choose 'Assign Envelope' and assign it to the parameter you want to control. On playback, the parameter will respond to the pedal or wheel messages. As you were 'flying blind' you may need to make a few tweaks, but at least you could create the changes in real time rather than having to slave over drawing envelope nodes.

Because you can easily access most Sonar track functions at the track itself, by right-clicking on it, the Track item in the menu bar may not get a lot of exercise. Yet it has a couple of useful options you won't find elsewhere. 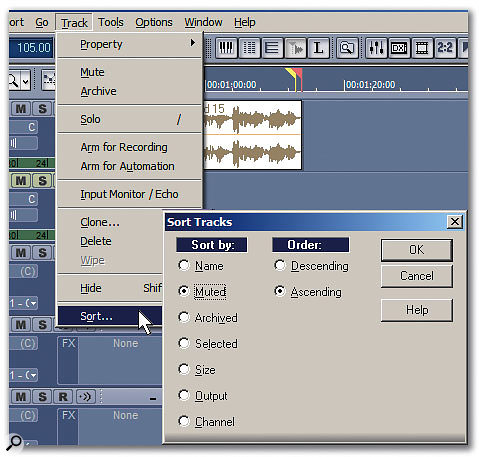 The Track menu has several useful options; this shows the various ways you can sort tracks.

How many of you think the Dreamstation DXi2 is a great soft synth? Hmmm...I thought so. In today's world of exceptional soft synths, the Dreamstation seems a bit dated, and the presets don't exactly show its best qualities. Yet it's possible to get some pretty groovacious sounds if you know some of the magic parameters to tweak (and did you know there's a formant filter option?). As a bonus, it takes up almost no CPU power, so you can pile on the instances.

One way to get some really tough, growling bass sounds out of the Dreamstation is to follow it with the FX2 Tape Sim processor.