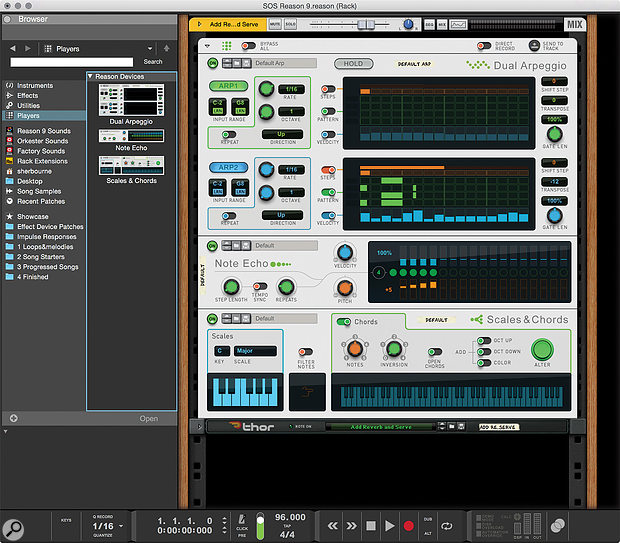 We look at what’s new in Reason 9.

After a short public beta period, June saw the release of a shiny new version of Reason, shoring up the weary hearts of this UK resident against the relentless downpour of rain and referendum rhetoric. I wax lyrical in keeping with the theme of Reason 9, wherein new transformative Player devices turn the merely prosaic into the sublimely poetic. You can also now change the background colour.

Everybody loves to see new rack devices in a Reason release, and Reason 9 has a whole new category of them! ‘Players’ are real-time MIDI Note transformers, taking notes you play or record and manipulating them in interesting and musical ways. Players can constrain notes to a scale, make chords from single notes, introduce all kinds of arpeggiation and add repeats, loops and echoes. These kinds of tools are in fashion at the moment, and Players joins other nice implementations such as those in Native Instruments’ Komplete Kontrol/Maschine and Akai’s MPCs that elevate the idea above older and less dynamic DAW MIDI effects.

Players show some differences from the Rack devices and REs we’ve seen before. They can’t exist on their own in the rack, instead they latch on to the top of instrument devices. They also don’t have any patch connections. MIDI from the instrument’s track is automatically passed through any associated Players in the order they are stacked. This makes using Players very simple while still keeping the Reason modular device aesthetic. It does however mean that you can’t pass notes from other rack sequencers like Matrix or Thor to a Player.

I’ll be honest, I wasn’t super excited about Players when I saw the announcement, but once I’d lost a few hours playing with them I was totally sold on the idea. I mean, how much more can Propellerhead do in terms of audio effects, and even instruments? Rack Extensions has totally opened these areas up, so we’re no longer reliant on new versions of Reason to get hold of new instruments and rack toys. Focusing on performance, and getting better musical ideas, makes total sense.

Just a few issues ago we explored audio tuning in Reason, using both simple clip pitching and the more advanced Neptune pitch-manipulation device. While Neptune is a great auto-tuner, for want of a less proprietary phrase, and is perfect for creative effects, I showed that the more clinical line-by-line tuning you might do with Melodyne or Auto-Tune’s Graphical Mode was more fiddly to achieve. Reason 9 now offers exactly this kind of graphical pitch editing directly inside audio tracks. 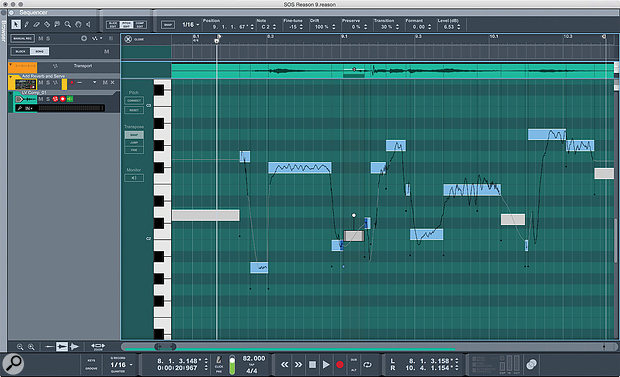 The Reason 9 Sequencer now has clear indication and selection of Edit Modes in its toolbar, with Pitch Edit available alongside the pre-existing Comp and Slice Edit modes. Putting an audio track into Pitch Edit mode reveals a piano-roll display (just like a MIDI track), and the audio is split into blocks whose detected pitches are represented by their vertical position. These blocks can be tuned manually by moving them up or down. Superimposed on the blocks are lines that give a detailed trace of the blocks’ pitches over time. ‘Pins’ placed at transitions on the line can be adjusted to change the glide time between notes and reduce vibrato or drift. It’s a really nice implementation of this kind of tuning, and I particularly like that you can move the blocks in time as well as pitch, allowing you to fix tuning and timing all in one place.

Propellerhead have always had a strong design philosophy and have been resistant to the idea of skinning or customisation of Reason’s user interface. Anyone who’s tinkered with Live’s colour scheme will probably have seen their point: most settings other than Ableton’s defaults look horrible. Reason 9 sees a compromise, offering two alternative UI themes that satisfy The Props’ aesthetic. Both are darker to reduce the glare of the original light-grey palette in dim light conditions. The Black theme offers a true ‘night viewing’ type of mode, while the Blue theme is rather Cubase-like. 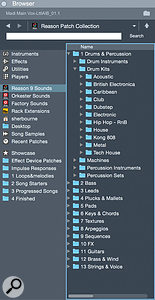 The Reason 9 Sounds pack organises all the new and classic Reason content by sound type.

Reason’s Factory Soundbank has been refurbished in this new version. The advertising has focused on the ‘1000 new sounds’, but the FSB has also benefited from a major organisational rethink. The new sounds have been provided by a hand-picked group of artists and sound designers, and, as you’d expect, mainly consist of Combis that take advantage of the new Players. However, it’s probably the re-organisation that is more significant, as it makes sense of several generations of sound content. A new top-level sound pack, ‘Reason 9 Sounds’, presents both new and classic sounds in a new patch library sorted by type rather than device.

It was only a few issues ago that I was bemoaning the lack of a true Bounce In Place feature in Reason, ruling out the already unlikely possibility that its inclusion in version 9 was just to please me. There are many scenarios when you want to bounce a section of a track without creating a new track or exporting a file. You simply want to flatten a section, committing it to a simple audio clip. Now you can.

The technology to derive MIDI Notes from monophonic audio is certainly not new, but I think its inclusion in Reason now is about more than just keeping up with the next DAW neighbours [Groan — Ed]. Propellerhead’s iOS app Take (which has now been rebranded as an Allihoopa product) makes it easy to hum a melody into your phone and bring it into Reason. The Props have also been putting a lot of focus on the Alihoopa service for sharing audio clips. Audio-to-MIDI functionality seems like some joined-up thinking, providing a tool to help develop these captured or borrowed ideas into songs in Reason. Reason 9 has the ability to derive either pitched MIDI Notes from suitable audio, or to just generate a series of single notes, offering another fast way to grab the rhythmic character of an audio recording.

Existing Reason users can update to a Reason 9 for €129; anyone who bought version 8 after May 1st, 2016 will get the update for free. We will of course be covering the new features in much more detail over the coming months.