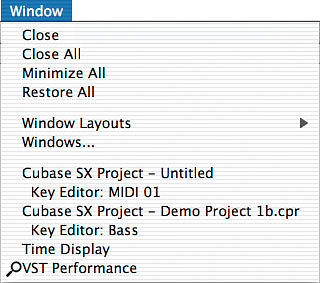 Your computer screen really doesn't need to be cluttered when you're working with Cubase's many windows, because Steinberg have provided handy window-management features. 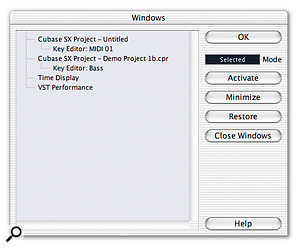 When you're working with multiple Projects, the Windows menu and window both provide a hierarchical list that makes it clear which Project the open windows belong to, in addition to providing many other useful features.Cubase SX is certainly better than previous versions at keeping the number of windows you need onscreen at any one time to a minimum. However, it's inevitable, with an application featuring many different windows, that you'll end up spending time opening, closing and moving different windows around, especially if you don't have large or multiple monitors. So while you might be thinking "Mark, I'd love to read a Cubase Notes about window management, but I have to go and pluck my eyeballs out just now", knowing about these less-than-glamorous features of an application like Cubase can actually save you the greatest amount of time in the long run.

The commands for window management are stored away neatly in the Windows menu, and the basic four (Close, Close All, Minimize All, Restore All) are pretty self-explanatory.

A list of all the open windows in Cubase is always detailed at the bottom of the Windows menu, and you'll notice that this list is arranged hierarchically, based on which of the open Projects each window belongs to. You can bring any window to the front by selecting it from the Windows menu; and if you have many different windows for many different Projects open at the same time, you can maintain absolute control over them in the Windows window, which can be opened by selecting Windows / Windows.

As with the Windows menu, you'll notice that the left part of the Windows window contains a hierarchical list showing the list of open windows based on which Project they belong to. You can bring any Window to the front (and close the Windows window) by double-clicking one of the window entries in the list. However, you'll notice that there are many other buttons in this window, for managing the windows you currently have open in Cubase. The exact effect of these buttons is set by the Mode parameter, located beneath the OK button at the top right of the Windows window, and you can toggle between the Selected, All, and Cascaded Modes by clicking in the black parameter box next to the Mode label.

It's probably worth spending a few moments in the Windows window with a few Projects open, just to get a feel for exactly what's possible. When you've finished, you can close this window without making any more changes by clicking OK or pressing the Escape key.

In the grand tradition of saving the best until last, Cubase's most useful feature for window management allows you to store various snapshots, which are known as Window Layouts, containing the state and positions of the windows currently visible on screen. These can later be recalled via the Windows menu or with a Key Command, enabling you to define a series of layouts for the most common situations in a given Project, and cut down on the time you spend arranging windows. However, it's important to remember that Window Layouts are Project independent, meaning that any you define are available to any Project you load into Cubase. 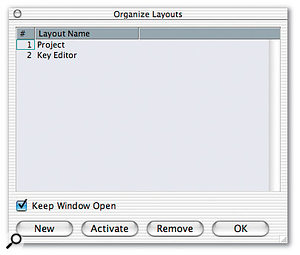 The Organize Layouts window makes it easy to define window arrangements that suit your particular working methods.To define a new Window Layout, arrange the Windows on screen to suit a particular working method, such as mixing or editing, select Window / Window Layouts / New (or press Control/Apple+0 on the numeric keypad), and in the New Window Layout window, type in a name for your Layout and click OK. Once the Window Layout has been defined, it can be recalled by selecting the name from the Window / Window Layouts sub-menu, or by pressing the relevant Key Command. By default, you can recall the first nine Window Layouts by pressing Alt/Option+1-9 on the numeric keypad, although it's possible to customise this in the Key Commands window.

New Window Layouts can be created by clicking New, typing in a name and pressing the Return key. It's important to note that the Organize Layouts window cannot be included in a Window Layout, whether the Keep Window Open option is enabled or not. Removing Window Layouts is, as you can imagine, a simple matter of selecting the Layout you want to delete from the list and clicking Remove — and you might be interested to know that you can't undo this operation.

In addition to looking rather pretty, Griffin's Power Mate can be configured to work as a jog wheel in Cubase by way of smoke and mirrors — well, Key Commands and Macros actually. I have to confess that when I first saw Griffin's Power Mate, I really couldn't understand the attraction — while a silver knob with a blue light looks rather neat, would I want to pay money to have what is effectively a glorified volume control on my desk? But after having played around with one, and reading Griffin's web site (www.griffintechnology.com) more thoroughly, I realised that the device is actually fully programmable in terms of the actions it transmits to your computer. In addition to being able to work as a volume control or scroll wheel, the Power Mate can also send keyboard shortcuts, and using the supplied software you can set it up so that each application on your computer makes use of the wheel in a different way.

For a Cubase user, the most obvious use for the Power Mate is, of course, as a jog wheel. And while I didn't have much success when assigning its 'rotate right' and 'rotate left' commands to Cubase's Forward and Rewind Key Commands, the Power Mate's wheel came to life when triggering the Nudge Up 24 and Nudge Down 24 Macros,as described in last month's Cubase Notes. For anyone who missed it, these Macros consist of 24 Nudge Up or Down Key Commands respectively.

However, the Power Mate's wheel can also act as a button to provide four additional actions: pressing the button, pressing and holding the button for a brief moment, and pressing and holding the button down while turning the wheel either left or right. You could set these actions to any commands you like, but my choices were to assign the button press to be Play/Pause, 'press and hold' to be Return To Zero, and the press, hold and turn actions to trigger the Nudge Up and Down Commands, which is great for moving the Project Cursor by a single frame when working with a frame-based Display Format.

The Power Mate is a handy little device that can be used with either Mac OS 9 and X or Windows, and for $45/£40, you can't go wrong!

Window Layouts In The Real World

The problem with many user-definable features such as Window Layouts is that they sound great but often leave you wondering exactly what you'd want to do with them. So to get you started with Window Sets, here's an example that can help to speed up editing when using a single-monitor system.