The Studio A control room is based around a vintage G-series SSL console.

In the studio world you can find high-end private studios, catering to an individual musician or producer’s specific needs, and commercial recording venues that rely on outside business for their income. However, there are also spaces that fall inbetween the two categories, and these are often the most interesting: while they offer a broad range of industry-standard facilities and services, they also feel more individual and personal than corporate recording venues. 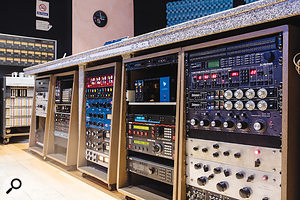 The well-stocked outboard rack in Studio A. 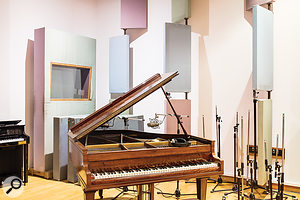 Instruments available include this Chickering piano. 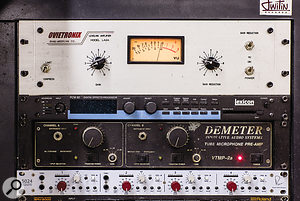 A custom-built LA-2A-type limiter by Ovietronix and a Demeter preamp — one of only two units that could be salvaged from a studio fire. 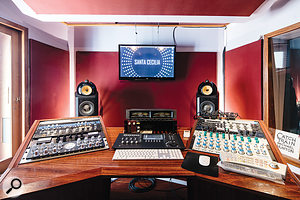 The mastering suite is an independent business run by engineer Brian Iele.El Pie, located in the North West of the Argentine capital Buenos Aires, is a prime example, having been shaped to the personal requirements of some of the most important figures in the Argentine record industry. The studio was built in 1992 by famous singer, composer and musician Alejandro Lerner. Almost two decades into his career at the time, Lerner set up shop in a former shoe factory in the mostly residential barrio of Villa Urquiza. Built in the 1940s, the industrial space offered all the parameters pivotal to the contruction of a music production facility, including the high ceilings required for a large live area. It also suggested the studio’s name: El Pie means ‘the foot’ in English!

The largest space of El Pie, the Studio A live room, was built in the area where the main machinery used to be placed. The complex also houses the smaller production suite Studio B, a video production suite and a rehearsal space, as well as a mobile recording rig capable of 96-track recording.

A more recent introduction is the independent Santa Cecilia Sound Mastering Studio, operated by engineer/producer Brian Iele, on the second floor. This offers a high-end technical setup around processors such as a Buzz Audio Resonance and API 5500 EQs, as well as API 2500, Crane Song STC-8, Elysia Alpha and Manley Vari-Mu Mastering Edition dynamics processors and a monitoring setup that employs B&W 802 and ProAc Studio 100 loudspeakers. 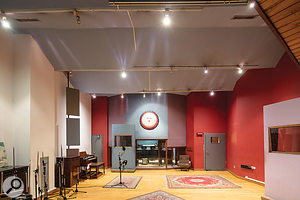 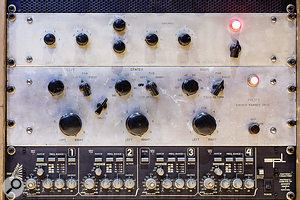 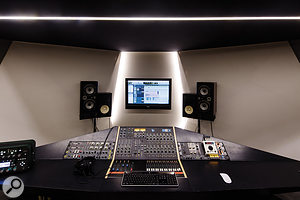 Fabián ‘Tweety’ González has made Studio B his home for many years. It is based around an API The Box console.Studio A boasts a 70-square-metre live area with two isolation booths, and a spacious control room of around 35 square metres. It is centred around an SSL 4040 G+ console and an outboard collection that inclucdes both studio standards and rare, unusual items. Sessions can be printed both to a Pro Tools rig and a Studer A800 MkIII two-inch, 24-track recorder, while the classic desk is accompanied by pairs of Neve 1073 and API 512c preamps, GML 8200, Tube-Tech ME1A and Urei 545 EQs, a rare Pultec Mavec EQ/de-esser, and Tube-Tech CL1B and UREI 1176LN and 1178 compressors/limiters.

Reverb and effects duties are handled by classics such as a Lexicon 480L and 300, and the racks also boast several Eventide H3000 and TC Electronic units. Instruments include a Chickering & Sons piano, a Hammond B3, a Fender Rhodes MkI and a Moog Memorymoog synthesizer.

Studio B has been home to legendary musician and record producer Fabián ‘Tweety’ González for many years. One of the central figures of Argentine record-making, Tweety González played keyboards with acts such as Soda Stereo and Fito Páez, has been involved in productions by Shakira, Gustavo Cerati, Spinetta, Superlitio and Famasloop among many others, and runs his own record label, Twitin Records. The room was shaped to his exacting requirements, including a highly distinct interior and furniture design inspired by the characteristics of a stealth aircraft. Apparently, what’s good for radar dissipation helps with sound diffusion, too! The angled surfaces not only give the room excellent acoustic properties, but they look spectacular as well.

The heart of Studio B is an API The Box console accompanied by a number of outboard units such as a passive Petrungaro SM-VIII eight-channel summing mixer, pairs of Chandler Limited TG channels and Empirical Labs Distressors and an API 2500, as well as a number of 500-series modules. The studio also houses a beaten-up Demeter preamp and Clavia G2 synth — the only two units that could be salvaged from a fire at a friend’s studio, and testimony to how durable proper sound equipment can be. 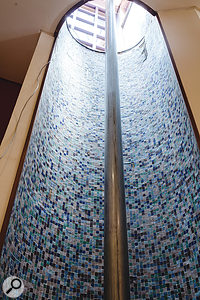 A nice way to arrive in the office! Studio owner and Batman fan Alejandro Lerner has added a touch of fun to the environment with his fireman’s pole.Both the room and the technical setup are excellent, but Tweety González’s main reason for setting up shop at El Pie remains the experienced staff at the studio, who have worked together closely for many years. While Studio B remains his private studio, it is rented out to external clients when available.

And there’s also room for a little extravagance: Alejandro Lerner, who is a huge Batman fan, installed a fireman’s pole between his offices upstairs and near the lobby. He has been seen wearing a cape on several occasions, too...