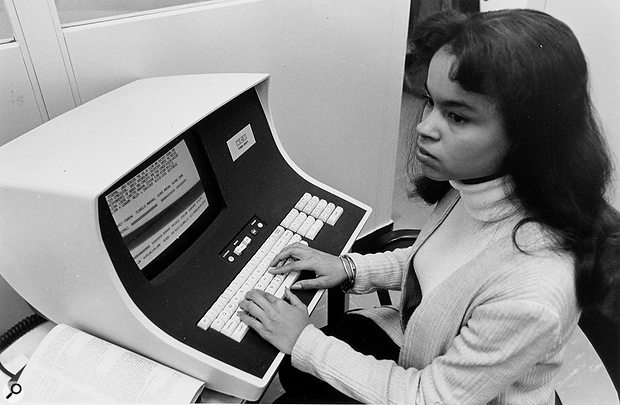 “Now, shall I write that pioneering electronic soundtrack? Or should I just conform to society’s expectations and do some typing?”

Despite great progress elsewhere in the TV business, music for the media is still overwhelmingly dominated by men. Why?

Why aren’t there more women TV and film composers? I doubt there are accurate figures available, but my guess is that at a professional level, the fellas outnumber the ladies by at least 10 to one. And that is a terrible shame.

Two of the last three Academy Awards for best music score won by British composers were won by women; and at industry award nomination levels (BAFTAs, Ivors and so on) the number of times that women’s names appear in relation to soundtrack work is massively out of proportion compared to the relatively small number of professional female composers. In other words, there aren’t many women that take it up, but those who do have often proved brilliant at it. Why should this be?

Could it be the fact that women rule the medium these days? The best three TV producers I’ve ever worked with are women, and from management level to lowly production runners, television appears (from where I sit) to be as equal opportunity an employer as it’s possible to be. It surely can’t be that women have a ‘better line of communication’ between client and composer, or that a female producer is more likely to favour a less qualified female composer in preference to a better male counterpart? Of course not. I’ve got another theory.

Mistress Of The Motherboard

The nature of the business means that if you aren’t hanging onto the cutting edge of music technology, you won’t be able to turn around work to the standard required in the time they give you and the budget you wish they gave you. Computers are as familiar a piece of everyday technology as the shower curtain, but in this game, mere familiarity is not enough. Consider how many plug-ins you have. Consider the sheer complexity of each one being a separate third-party piece of software that runs inside a DAW that runs inside an operating system. Every new OS update sends us all scrambling to Facebook forums desperate for info on which parts of our valuable sound palette won’t work yet. Should we make the update leap? What other things will stop working if we do?

My beloved Steinberg Virtual Guitarist plug-in stopped being updated and supported sometime in the last century, and each OS update sees me wasting hours tinkering with the Plist editor, hacking and bodging it to try and get it to work. It’s as flaky as hell and held together with the Apple programming equivalent of gaffer tape and spit, but for the moment, it just about still functions.

These are deeply nerdy tactics, and of course, none of what I’m doing couldn’t just as easily be done by a woman. But the culture of engaging women to take up careers as engineers, scientists and programmers has been a long time coming, and there is still a very long way to go. My daughters are way more tech-savvy and computer-literate than I was at their age — but even they view what I get up to in the studio as being little more than an eccentric old man spending hours tinkering in his shed just to make a particular box go ‘bleep’.

Very few girls grow up dreaming of the day when they can successfully manage all their iLok authorisations. But unfortunately that’s the price of admission these days. Is this a massively crass generalisation? Of course it is. There are plenty of girly geeks, and there are obviously many amazing female composers, but the trouble is in today’s hi-tech world you need to be quite a bit of both. And unfortunately (for the time being) it appears to be a depressingly rare combination.