If, at times, music for media feels impossible to break into, that's because it is. And there's a good reason for that. 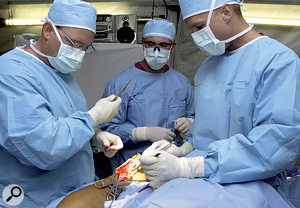 "Don't worry, I think I'm getting the hang of it now. Remind me what this one is for again?”

Jeremy Clarkson maintains that the best way to save the pandas is to start eating them. If you could buy panda steak at posh restaurants, or panda gland extract was sold to rich women as an ultra-expensive beauty product, you can bet that someone, somewhere would figure out a way of getting pandas to f**k each other every once in a while. And he's absolutely right, because the biggest obstacle in the way of getting started and getting on in this business is those around you who are trying to do the same, but with a bit less enthusiasm. As a result, our customers have highly developed defence mechanisms in order to avoid and filter out the deluge — and the default response, if they bother to reply at all, is usually 'No'.

Take, for example, an apparently serious email I received this week: "I really want to get into film scoring. I'm always writing songs with my band and this seems like something I could branch into, but it seems like such a closed shop so how do I get in? Should I approach directors?”

If you were to replace the words "film scoring” with the words "advanced vascular surgical techniques with particular emphasis on peripheral artery occlusive disease” and finish with the sentence "Should I approach hospitals?” you have some idea of why the people in charge of film and television projects build such impenetrable walls around themselves. Can you imagine the giddying levels of utter music-hating ignorance they'd risk exposing their precious, expensive projects to if they didn't?

Nobody's Fault But Ours

The background noise of the have-a-go hero wanting to break into the business is infinitely more damaging to the careers of serious, hard-working composers than any incompetent A&R man, file-sharing web site or cloth-eared music executive. And we only have ourselves to blame. If you are prepared to give it away for free, you can't be surprised when that becomes the industry standard. The Musician's Union are continually battling against the live music pay-to-play scam, where bands pay for the privilege of appearing on stage at higher profile venues. How long before the same happens with TV programmes and film? With huge numbers of people fancying having a bash at it, why shouldn't programme makers view music placement as a revenue stream, like on-screen product placement or premium-rate phone-ins? Seems perfectly logical to me. I give it five years before the term 'Negative Music Commissioning Budget' becomes a commonly used industry phrase.

The best and busiest in this industry will tell you that composing isn't something that they do, it's something that they are. If you want the world of media composing to be a better place, stop trying to join it just because you think you "might like to have a go at it”. Be dedicated, focused, creative and realistic, and there's a chance that your clients might view you in the same way.