Today's composers are expected to be available around the clock — and around the globe. 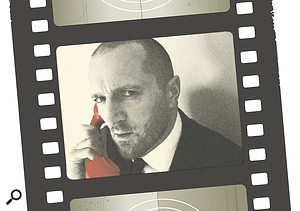 Deep beneath the Swiss countryside, scientists at the CERN laboratories are busily trying to create some anti‑hydrogen. Like all anti‑matter, it has the potential to revolutionise our understanding of energy and of the universe itself, and it is hoped it could one day power starships across the galaxy, or perhaps even make an iPhone work for more than a day between charges. Of course, the bleeding edge of science doesn't come cheap, and anti‑matter is currently working out at about $62.5 trillion a gram — which, while not quite as shocking as the cost of printer ink, is still pretty steep.

Thankfully, the world of pro audio is more forgiving. Our equipment has never been cheaper or more powerful. In 1996, my studio was insured for £35,000. And it was crap. Based around an Atari 1040ST with its single megabyte of RAM — a bit less than a modern novelty musical birthday card — and a Behringer Eurodesk, the signal path of which was only slightly quieter than the massive industrial fans needed to cool the 230‑megabyte hard drive that fed the samplers. When I bought the hard drive, it cost £1100. The meter bridge for the desk (basically a row of LEDs) was £800. Adjusting for inflation, the cost of that lot ran to around £47,000. What sort of studio would that buy you today? A bloody good one.

Consider the Fairlight. As a geeky youth, I found the Fairlight an almost untouchably powerful and sexy beast. It could perform magic with audio, looked awesome in pop videos and even turned people like Jan Hammer and Jean‑Michel Jarre into rock gods. That's real power, right there. In 1979, when it was released, it cost about £20,000 — and that's back when £20,000 was considered a lot of money. And how much bang did you get for your buck? Just 16k of RAM per voice. Hilarious. Recently the entire Fairlight was released as an iPad app for about £30. If you were into studio technology in the '80s, that's a bit like someone giving Aston Martin DB9s away free with boxes of breakfast cereal. 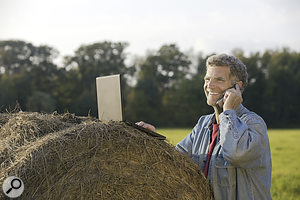 "You're in luck! I can make those changes right away, I'm in the studio now...”

For the media composer, the modern studio has become a vital, and yet an oddly irrelevant thing. I carry my entire production facility around on a MacBook Pro. So wherever I go, my studio comes with me. I was recently working on some tracks for a kids' TV show while on the move. I had a singer emailing me her vocal parts, which I was putting into the track, mixing and emailing it all off to the studio floor of the production — which happened to be in Dubai, of all places — from the back seat of a car flying down the fast lane of the M4.

And while this unimaginable degree of connectivity means you are always technically 'at work', it pans out fine, because this isn't a real job anyway, and my clients and their deadlines certainly don't care two hoots about my schedule. They need their music urgently, and if I'm on a train or in my pyjamas, my ability to do their bidding and send them the music is a much more desirable attribute than having an Italian coffee machine in a studio at a cool central London location.

Don't ask me where we go from here. It'll probably end up with us all having Firewire 6000 sockets grafted onto our foreheads, or Bluetooth transmitters in our teeth uploading our every musical utterance to a central music server at Sky TV — but for the time being, the trade‑off of being able to work efficiently and creatively from virtually anywhere is a price that I, for one, don't mind paying.