The musical challenges involved in composing for TV can be intimidating enough, but it's the legal documents that are truly scary. 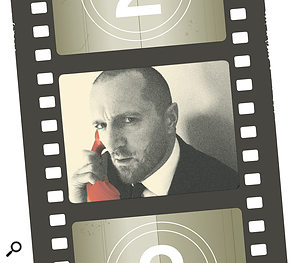 I did a last‑minute TV job for a production company recently. They wanted a short theme tune, some stings, end credits and a bed track. Everyone was very pleased with the music, and shortly after it was all signed off, the company's music department sent through their standard draft contract for me to look at and approve before signing.

If you added up the total number of words spoken in the Gettysburg Address, Martin Luther King's 'I Have A Dream' speech, Christ's Sermon on the Mount, the US Declaration of Independence and Winston Churchill's 'We Shall Fight On The Beaches' address to parliament in June 1940, you have a total of 6107 words.

The contract I was sent for my little theme tune dwarfed that total, weighing in with a hefty 9354 words. Included within its 48 dense pages were clauses whereby I relinquished all rights for the music to be used on "planes, trains, ships, and at military bases”. It mentioned my willingness for my music to be exploited and encoded (for no extra payment, of course) into "musical mugs, board games, garments, jewellery, greetings cards and toothbrushes”. The contract had sections where I had to describe my parents' ethnic origin, include my National Insurance number twice, and state whether I considered myself to have a disability. I had to pepper my signature through it some 15 times, and it even managed a dash of creativity by spelling my surname three different ways.

What Do They Want, Blood? 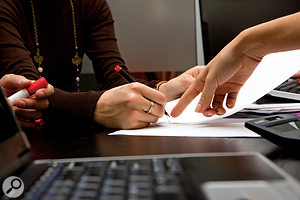 "No, this section relates to toothbrush licensing as it applies in the Benelux countries only. Britain and Ireland are dealt with on pages 453‑65...”

A decent London law firm specialising in musical contracts of this kind would charge around £250 per hour, and to have a lawyer comb through a document of this size would take, I am told, approximately four hours. Meaning that if I were to actually take independent legal advice before signing — as the contract itself insists I must — I would be £1000 out of pocket before I start work, simply to check that somewhere hidden in the contract I'm not perhaps committing my firstborn into slavery, or agreeing to stand as the BNP candidate for Hammersmith and Fulham.

I'm not sure if production companies and broadcasters seriously expect the average musician to be able to grasp and fully understand legal documents of this size and scope. We console ourselves by skimming through them with the rather grimly simplistic hope that basically the composer gets some PRS and whatever tiny commissioning fee he can haggle, and everything else belongs forever to the commissioner. And let's not forget this is just one contract for a single job: if the composer is lucky enough to be busy, he or she should be prepared to wade through dozens of these types of lengthy tome every year.

In life you never get what you deserve, only what you negotiate; and of course we have the right to request amendments and additions, or even issue our own contracts. But obviously this is a classic example of the principle whereby the bigger you are, the more teeth you can show at the negotiating table. Does asking for the "musical toothbrush” clause to be removed forever blacklist me as being difficult to deal with? Will I ever work again if I tick the boxes marked 'Caucasian' or 'Able Bodied'?

The upshot is that, in legal terms at least, there is surely no such thing as a small gig any more. How prescient, then, of Shakespeare to pen those immortal lines 400 years ago in Henry VI Part 2: "The first thing we do, let's kill all the lawyers.”