Get a few commissions under your belt and you might start to think you're a big name in the world of music for the media. But as far as the people who make television are concerned, there's no such thing... 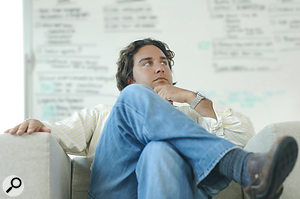 The Executive Producer: more powerful than you. And probably younger and richer, too. What's the hardest thing about being a TV composer? Getting your foot in the door? Getting paid? Getting rich? Actually, it's none of these.

About four years ago, I was commissioned to compose the music to a TV series for a major UK channel. The show needed lots of cues composing, and I was about five weeks into production when I got called up to meet the Executive Producer. The 'Exec' is the one person in the production food chain who you never usually get to meet. They are, essentially, the buyer for the TV channel, who will say to a production company something like "Go away and make me a show that is 50 percent Big Brother, 25 percent One Man And His Dog and 25 percent Doctor Who." They will 'oversee' production and have final approval of every element, but tend not to get their hands dirty with the actual 'process'. In short, they are your boss's boss.

I was taken up to the top floor of London's TV towers and ushered in to his office. He was, as you might expect, a bleeding–edge media type with three haircuts and the kind of trainers that looked like they had been beamed onto his feet directly from Tokyo in the year 2047. We chatted amiably for some time about the music for the show, we went through the stuff I'd done so far, and talked about what was working, what needed improving and generally constructive stuff about tone, colour and audience demographics. I held my own and thought I was doing quite well until the end of the meeting, when he casually asked me if I'd ever done any TV music before!

Err... It took a while to realise what was happening. Had I just been insulted? No. It was much worse than that. It had simply never occurred to this man that anyone could ever write TV music for a living. Or even that someone would compose music for a particular purpose. He simply assumed music lived on a CD somewhere, or was cut from the bits that pop stars didn't want any more. Or, to put it another way, my entire career was a surprise to him.

In these days of music being devalued and creative copyright seen as merely a distraction, rather than an essential cornerstone of our artistic culture, you can see why the job of TV composer is little more than that of the pianist in the corner of the pub; the provider of some noise to set the tone for the main event, which is, after all, drinking, fighting, pulling women and getting people to text in at 75p a pop.