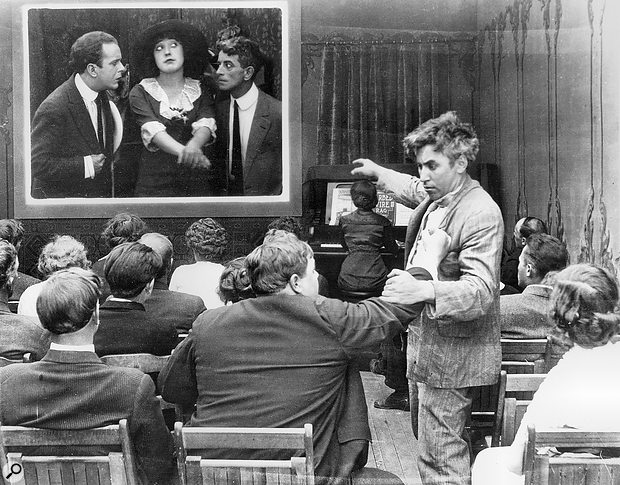 “I’m sorry you don’t like the special effects, sir. CGI will be along in another 100 years or so.”

You might be the next Mozart, but if you can’t meet impossible deadlines, no-one will hear your music on TV.

The first ever projected motion picture opened its doors for movie-goers in Paris on December 28th, 1895. Employees Leaving The Lumiére Factory was a 46-second-long silent film featuring a line of workers walking out of a building in Lyon, and was perhaps a little thin on what we might consider plot or cinematic excitement. All of that quickly changed when a visionary called Albert Kirchner saw the true potential of the medium. A few short months later, he released the seven-minute-long pornographic film Le Coucher De La Mariée (The Bride’s Bedtime). A year later he shot a short 12-scene film called The Passion Of Christ, establishing himself in the unique historical position of being the first man to bring both Jesus and hardcore sex onto the silver screen.

Far from being a sensationalist showman, Kirchner appears to have been something of a renaissance man. He designed, patented and manufactured the early film cameras which he used to create his movies, showing engineering, technical, artistic and marketing flair decades ahead of his time. Most importantly, though, he understood what the viewing public really wanted to see, and got his creative skates on to deliver it.

Like painting a car, making music is a precision industry. Like painting a picture of a car, however, it is also a spiritual and artistic endeavour. The pull between science and soul is at the heart of creativity, and one of the most valuable traits of TV composers is the ability to be able to think on their feet. The ability to turn round ideas fast is a huge part of the battle, and with the music component often one of the last things to be considered in the complex and expensive world of TV production, it pays to be able to pull high-quality work out of your hat at a moment’s notice.

The house band is, sadly, a rare thing these days on TV productions, but programmes (particularly entertainment shows) are often still made with the mindset of there being a music-making ensemble on tap in the corner of the room, providing ways to bridge a 15-second gap or underscore a late addition to a show’s running schedule. You might not have any live musicians and you might be hundreds of miles away from the TV studio — but if you can mirror the same level of readiness and fast turnaround, your clients will love you for it. I once took a call at 9am to write the music for the end credits of a programme that had already begun transmission and whose ending would be silent at 10.30 unless I wrote, recorded and mixed the track, and emailed it down to the studio floor within the next five thousand, four hundred seconds.

I’ve said before that the worst kind of jobs are those that are open-ended. Deadlines focus everyone’s attention on what’s important. Deadlines are impassionate, pragmatic and brutal. Deadlines, in short, are your best friend.

At the 1952 Helsinki Olympics, Luxembourg’s gold medal win in the men’s 1500m was so unexpected that organisers had neglected to prepare a score for their national anthem. So the band hastily improvised one which they played at the medal ceremony and, of course, it sounded nothing like the real thing. In Geoff Tibballs’ book The Olympics’ Strangest Moments he suggests “no-one was any the wiser”. There’s an old maxim in the trade of people who make things that says between the three adjectives of fast, cheap and good, a customer can only ever pick two. But the closer you can get to providing them with the final third that they didn’t pick, the more successful you will be.