It’s only when you look back that you realise how far you’ve come...

It started with a ping. University of Westminster Commercial Music Reunion. Going?

“Ah, Facebook, you romantic fool!” I scoffed, “It was only the other day that Wag and I left those hallowed halls and embarked on our lives as enfants terribles of the media music scene.” Then we looked at the calendar, then the mirror, and the realisation dawned: 20 years. Twenty years! It’s 20 years since 1996, when we moved to London in search of fame, fortune and commissions. 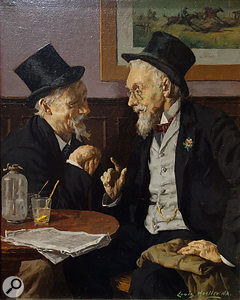 “But has anything really changed for us in the last two decades?” asked Wag, presumably rhetorically — although faced with photographic evidence of our rock vests and combat trousers he was forced to concede that, sartorially at least, things had moved on a bit. I dug around in that box in the cupboard at the back of the studio and there it was: further proof. The Banks & Wag branded CD-Rs for sending out pitches. The business cards with a fax number. The vague memory of a first official meeting with a library company, delayed by half an hour — enough time for us to sink two pints in the local. (Advice to fledgling composers: do not do this. The meeting will not go well.)

Reminiscences of sitting, side by side, in a box room so small you could reach out and touch both walls, staring gleefully at our student loan-funded gear: an Atari computer, a Fostex FD4 multitrack recorder, an Akai S950 sampler. “What more could we ever need?” we asked ourselves, this time actually rhetorically. Painful recollections of taking the hour-long tube trip to Soho armed with a DAT of our latest 30-second advert pitch, only to discover on arrival that I’d picked up a blank DAT by mistake. Making the arduous two-hour round trip home and back again with the actual demo, only to have it tactfully declined.

The game-changing invention of MP3s! Now we need never leave the studio again! And with the aid of our futuristic dial-up connection, that 30-second pitch could be in the hands of a would-be commissioner in less than 45 minutes!

And, right at the bottom of the box: there it was. A little dusty, a little scuffed, but undeniably our first Banks & Wag music showreel. On cassette. Evidence of the “We can do anything!” arrogance of youth, all MIDI orchestral symphonies and earnest indie band rip-offs. But also, a spirit, a passion, an energy... Some of it was, well, pretty good.

Fast forward (does anyone even fast forward any more?) to 2016, and I’m typing this with Wag my virtual companion in the corner of my computer screen — he’s working in our other studio in South London. We’re Dropboxing stems from Mac to Mac, we’re sharing screenshots of mix pages. As the deadline looms to our latest BBC commission, I’m bouncing out 160 tracks of audio without any spinning beach balls of death. And as I wait the few minutes for my trusty computer to work its magic, I turn that cassette over and over in my hand and conclude that, yes, much has changed for us and media music since 1996. I wonder what we’ll be reminiscing about in 2036?

(And, lest you worry that the only copy of that original showreel resides on a long dead format, I can allay your fears. I backed it up to MiniDisc.)