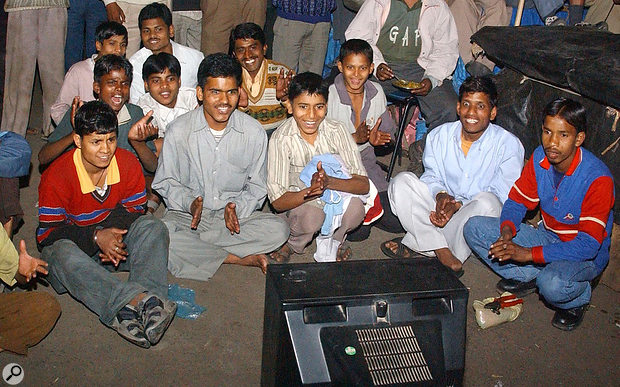 For decades, the people of the remote mountain village had been starved of Western gameshow music...

TV composers won’t change the world — but the fact that we’re needed at all can be significant.

On August 18th, 1994, Saddam Hussein created Law 109. This specified that, according to article 42 of the Iraqi constitution, anyone who had already had their hand chopped off for committing a theft should, if there was any further transgression, have either an ‘X’ or (in the case of military use) the word ‘coward’ branded onto their forehead. He even specified in the law what size the letters on the branding iron should be. The law also helpfully mentioned that any doctors caught treating the transgressors with plastic surgery or similar medical help would, themselves, have their ears cut off. Those hardest hit under his regime were undoubtedly the Kurdish population in the North of Iraq who suffered years of violence, intimidation and, in 1988, attempted genocide, when Saddam Hussein’s nerve gas attack on the town of Halabja killed as many as 5000 innocent civilians.

And You Think You’ve Got Problems

Some 20 years later, I find myself working with my friend, colleague and TV music supremo David Lowe for NRT: the first independent TV station set up by Kurdish people to serve the Kurdish/Iraqi population in the North of the country. They are broadcasting news, sport, current affairs and entertainment, and they need music. The brief is to brand the station’s output with a sound that is slick and modern enough to appeal to TV audiences familiar with Western global media, yet imbued with traditional Arabic/Kurdish ethnic flavours.

The day-to-day challenges of running any media business can be troublesome at the best of times, but the owners of NRT have problems that extend beyond minor niggles like shrinking audience figures, digital diversification and stroppy on-screen talent. In 2011, 50 gunmen stormed the NRT TV studios in Sulaymaniyah, showered the place with bullets, laid explosives and reduced the building to rubble. It didn’t stop them, however, and transmission resumed some time later. After receiving numerous death threats, the channel’s owner was eventually gunned down in a drive-by shooting in 2013. He somehow survived, though he has been left with a permanent limp. “As long as I am alive,” he defiantly announced from his hospital bed, “I will neither shut down NRT, nor will I retreat.”

A Bit Of Perspective

I can’t pretend to understand the intricacies of the internal politics of the region, and I certainly don’t know enough about the historical and tribal backdrop of the area to know who is right and who is wrong — as if clumsy absolutes mean anything in circumstances like this — but if they’re shooting at you, you surely must be doing at least something right. We tend to think of any big business as being indelibly sullied with the desire for profit, and I’m certainly not being misty-eyed in suggesting that Dave Lowe and I were on some kind of charity mission, but broadcasting’s core purpose is to communicate, inform and entertain. And there’s something incredibly noble about those who strive to do that in the face of men with guns trying their very best to silence them.

And that’s the point. Set against an environment of intense competition and potentially massive reward, people who work in TV take their jobs very seriously. And yet at the same time, we in the West are all painfully aware that none of us are really curing leukaemia. The absurdity of our work and the general silliness of our careers serves as a marker of a healthy society that is stable enough to pay us to be so. I’m not a surgeon or a bomb disposal expert and I don’t know anything about counter terrorism. So the fact that the Iraqi people would ever need the services of someone like me is definitely a cause for optimism.

Marvel's Guardians Of The Galaxy
2 weeks 1 day ago.