TV Music From The Inside By Richard Jacques 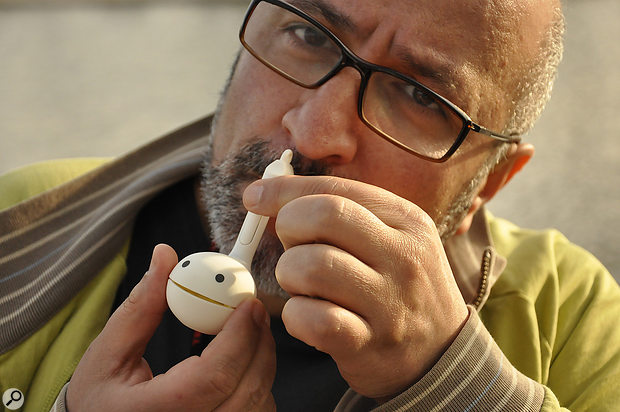 Although he didn’t get the gig, John never regretted learning the Patagonian nose piccolo to pitch for it.Photo: Erik Hersman

To get a job in the media you need to do a job. Specifically, you need to write a pitch that will blow the doors off.

Ah, pitching. Necessary evil, or a wonderful opportunity? Well, both. Pitching is an integral part of being a successful media composer, and for those of us with limited time, it can often be overlooked.

Pitching exists in most facets of media composition, including TV, advertising, games, film, radio and elevator music. (Well, perhaps not the last one, although I don’t have first hand experience of this.) The pitching process can vary significantly between these forms of media, but the end goal is the same: landing the gig!

For example, in advertising, it is often the case that about 4.30pm on a Friday afternoon, you are thinking about that Saturday night romantic dinner, the kids’ party on Sunday, the Friday after-work meeting in the pub — and then, all of a sudden, New York wakes up and sends out a million advertising pitches. And, of course, the deadline is Monday morning. Do you forgo yet another weekend in pursuit of your craft? Do you leave it until Monday morning, factoring in the time difference? It can be quite a quandary.

Advertising executives expect your pitch to be a finished product. You could be up against 50 other composers, but doing ad pitches is also great practice for a composer, making you focus on every frame of the picture, every buzzword that is coming from executives (“Make it more green!”) and every reference track. I’ve worked on many ads, from Stella Artois to Mercedes; you do the pitch, send it off, and some you win, some you lose (or they just end up buying the track that they referenced). It can be a frustrating process, but it is advisable to do the pitches in order to build successful relationships. Don’t forget there are two words in the phrase ‘music business’ — and remember that some creatives who are in charge of pitching might be completely non-musical, while others may have a master’s degree in composition.

For television, you could be asked for a main title track (or ‘sig tune’), plus a few examples of tracks that would appear in the programme. In general, I haven’t been asked for more than two to four minutes of music for a TV pitch, and the deadlines are much kinder.

In video games, there could be two or more rounds of pitching, as the music director whittles down the candidates. This is the opportunity to show how you work to pictures and gameplay, how you respond to feedback, and how you interpret the brief. I always take the attitude that I want the music to sound like their show/game/film/ad, and not to reference what has come before too much. I try to make everything I do as unique as possible, sometimes giving the commissioners what they haven’t asked for as well as what they have.

Is it ever OK to decline to pitch? I have only ever done so once, after speaking to some composer friends and realising that over 300 people had been asked to pitch. Needless to say, the client didn’t receive a single pitch.

Some pitches are paid and some unpaid. It can vary widely depending on the gig. In general, the more work required, the more likely a pitch fee will be due. It never hurts to ask, though.

In one of the biggest pitches of my career so far, I put together a five-figure budget to record the pitch. Whilst this was a big gamble, it paid off, leading to a six-figure project. One of the Hollywood ‘A’ listers who was also in the frame sent a photo of himself and his last score on CD. Always give them what they have asked for, with accompanying marketing materials if necessary. If you show that you can invest in yourself, then others will invest in you.

Richard Jacques (www.richardjacques.com) is a multiple award-winning, BAFTA and Ivor Novello-nominated composer of music for games, film, television and advertising. His credits include Mass Effect, James Bond 007: Bloodstone and the Little Big Planet series, as well as commercials for Audi, Bacardi and Toyota, and TV shows for the BBC, ITV and Channel 4.