The Story Of The Midas XL3 Skip to main content

The Story Of The Midas XL3

We follow the journey of one plucky British analogue mixing console, from its birth in a shed to the heart of a museum exhibition and a place in the history books.

It was three years ago that I first met National Science & Media Museum curator Annie Jamieson at a coffee shop near Olympia in London. We were both there for the Pro Light & Sound Show, and an introduction had been made between us as, apparently, I was a good person to ask about old live–sound equipment. Annie, a passionate enthusiast of all things related to sound technology, was trying to correct what she perceived as an imbalance in the museum's collections. At the National Science & Media Museum in Bradford, Annie had access to an amazing collection of photographs, cameras and assorted broadcast and recording studio artifacts, from the experimental television receiver used by JL Baird in 1926, to the original BBC Neve DSP1 digital sound console — a dazzling collection from the history of modern media. But of live concert sound? Nothing.

It dawned on me how much Britain was responsible for many of the great changes and innovations in my industry, an industry that was really only just over 100 years old. As we sat sipping our lattes we made up a wish list, predominantly from the last 50 years, of objects of significance. It was exciting and challenging to try and pinpoint things that had made a difference: the innovative, the novel, the important.

Fast forward a year, and I got a call saying there was now an official Sound Technologies collection at the museum, and that the hunt was on for a significant object to fly the flag for live sound. I think it was Annie who said it was a pity I wouldn't sell one of my old consoles...

I have to explain at this point that I am still very much an active working sound engineer. I no longer own a whole PA system, but I do own mixing desks, effects units and various bits of audio equipment. All this equipment I use in a touring capacity and at the heart of my setup is an analogue mixing desk: a Midas XL3.

I bought my first XL3 10 years ago, when they were already out of fashion and becoming unpopular, from John Tinline of Encore PA Hire in London. It was a very old desk then in audio gear terms, but in reasonable condition. It immediately went out on tour with me and the Prodigy (see SOS October 2010). As to why I chose that desk, I'd always fancied a Midas. I looked at the more recent models, like the Heritage 2000 and 3000, but it's a bit like when you buy a classic car. You can afford the one with the rubber bumpers, and yes, it's an MG — but it's not the MG!

So, would I go for an XL4, world famous as the flagship Midas? I almost did, but they're problematic: they're expensive to run and to maintain, and basically enormous. So, I settled on a Midas XL3, and the first one I bought was John's, serial number 003.

I think it was the appeal of the serial number and the name that sold it. It was also a desk I already knew; I had mixed on it several times already, and the price was right as long as it went to a good home. I actually found a quote from John in about 2001 saying he would never part with his pair of XL3s, which is ironic as I have since bought both of them from him, saying I wouldn't part with them either!

When Annie called again, my first thought was that the museum should buy an XL3. And that they should buy mine. I had just bought another smaller, newer XL3, and number 003 was being put into retirement. If I was going to let her go, it had to be to a good home. 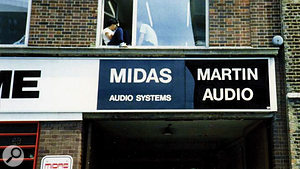