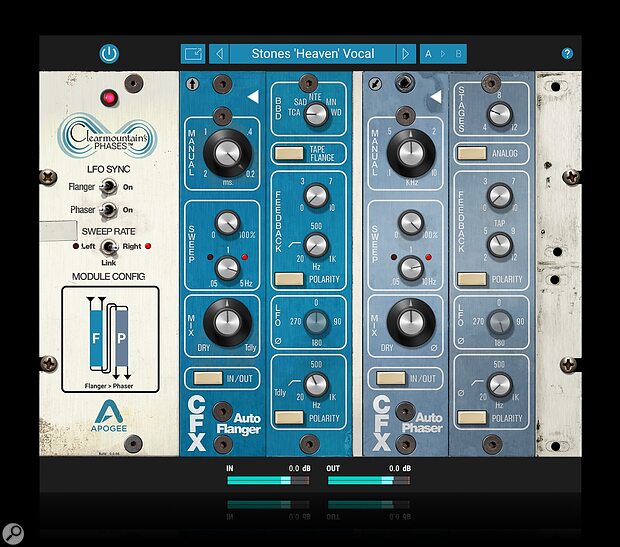 Apogee have followed up their successful Clearmountain's Domain and Clearmountain's Spaces plug-ins with another Bob Clearmountain collaboration. This time, we're being treated to a virtual version of the legendary mix engineer's rack of rare, vintage MXR Auto Flanger and Auto Phaser modules.

Clearmountain's Phases sports a photorealistic GUI, but adds some useful extra controls compared with the hardware originals. So, in addition to manual and oscillator control over the phaser and flanger sweep, you can adjust feedback amount, LFO phase, polarity and a high-pass filter. You also get extensive control over the routing between the phaser and flanger sections, with options to run them in parallel, in series (in either order), or as just a phaser or flanger effect.

Like with the previous Apogee/Clearmountain collabs, Phases comes loaded with presets inspired by classic tracks, all meticulously crafted by Bob Clearmountain himself. Among them are the phased drum sound from Led Zeppelin's 'Kashmir', David Bowie's 'China Girl' vocal, Jimi Hendrix's guitar phaser effect, and many more.

Clearmountain's Phases is available to buy now from Apogee's online shop, and it's priced at $149.