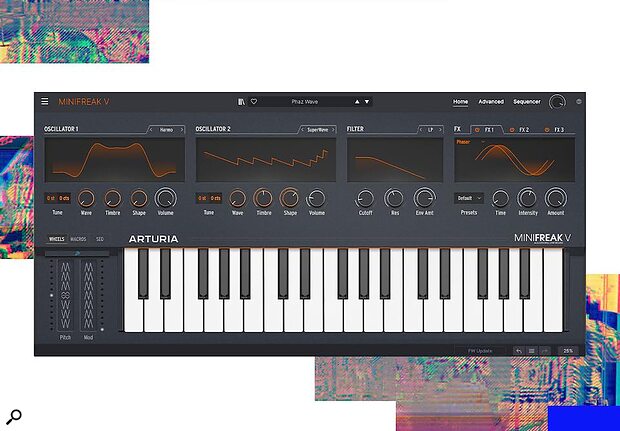 Arturia have announced that the software version of their recently released MiniFreak synthesizer is now available as a standalone virtual instrument plug-in, having previously been bundled exclusively with the hardware instrument.

MiniFreak V is described by the company as a mirror-image of the hardware, offering the same dual synthesis engine, a modelled analogue filter, and stereo effects, all of which combine to deliver a sound that Arturia say is indistinguishable from the instrument itself.

Like its hardware counterpart, the plug-in features six voices, with its two oscillators providing a wide range of waveshapes. The modelled filter offers low-, band-, and high-pass modes, whilst an effects section contains three individual effects slots that can be configured as either inserts or sends, and gives users a choice of 10 different built-in effects processors.

In terms of modulation, users have two LFOs at their disposal, as well as a Cycling Envelope function which can be used as a secondary envelope or configured as a repeating envelope generator, where it will behave in a similar manner to an LFO. It is also possible to create custom LFO shapes, allowing for more complex and unique modulation possibilities.

There are also a range of performance and sequencing capabilities included. The instrument boasts comprehensive built-in sequencer and arpeggiator functions in addition to Chord and Scale playing modes which can be used individually or combined, offering an intuitive and enjoyable way to explore new musical ideas.

For more details on MiniFreak V and how it relates to the hardware instrument, check out our recent in-depth review of the MiniFreak (print / web / app / replica / PDF editions).

MiniFreak V is available now for an introductory price of €99, reduced from its full price of €199.

Arturia are celebrating the launch with a selection of other exclusive introductory offers for new and existing users, with discounts available on the instrument itself, or as a bundle with the company’s V Collection 9 software package. The offers will be available until 2 February 2023.  More details can be found on the Arturia website.