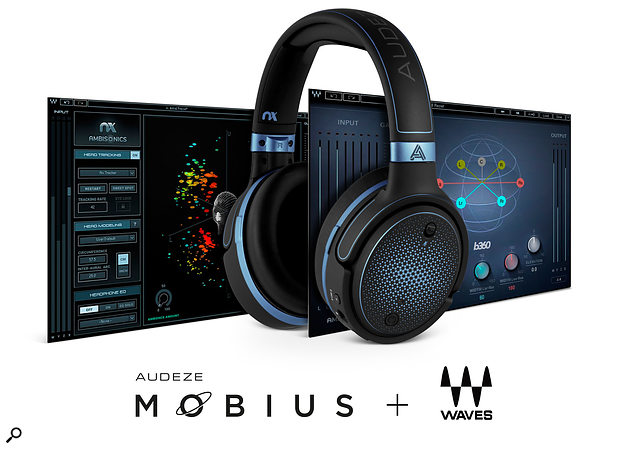 Best known for their innovative planar magnetic mics and headphones, Audeze have launched a new pair of cans aimed at both consumers and audio professionals working on VR and immersive audio projects. The Audeze Mobius headphones combine the company’s planar magnetic drivers with the Nx 3D audio technology developed by Waves and ably demonstrated by the Waves Nx Virtual Mix Room plug-in.

Designed to provide those mixing on headphones with the experience of mixing in an idealised control room, the Nx plug-in incorporates head-tracking features that keep the virtual 3D soundscape consistent as you turn your head. While the plug-in requires either a webcam or a Bluetooth tracker attached to your headphones to do this, the Mobius set already incorporates motion tracking features and is able to communicate directly with Waves Nx Virtual Mix Room and the Waves B360 Ambisonics encoder. The Mobius headphones feature 100mm Audeze planar transducers and a built-in battery offering over 10 hours of battery life, according to the makers. Connecting via Bluetooth, USB or analogue mini jack, the Mobius headphones support stereo audio, 5.1, 7.1 and Ambisonics formats and promise anatomical calibration features, allowing you to customise the soundfield to the precise geometry of your head!

Initially launched on the Indiegogo crowd-funding site, the Mobius headphones are set for release in June. The Creators Edition, which includes the Mobius headphones and the Waves Nx Virtual Mix Room and B360 Ambisonics Encoder plug-ins, costs $797 while the headphones on their own cost $399, though at time of writing both were still available to pre-order via Indiegogo for $499 and $269 respectively.