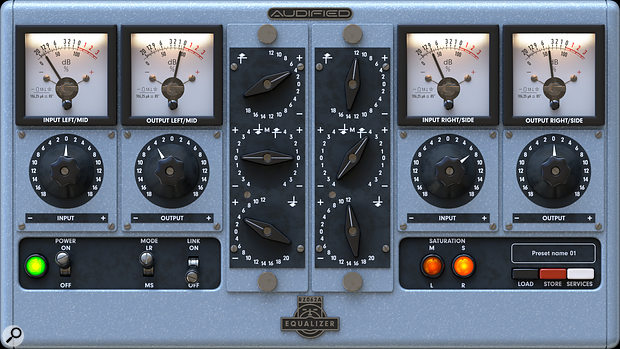 Czech developers Audified have released a pair of EQ plug-ins modelled on much sought-after valve hardware made by Siemens in the ‘60s. The RZ062A and RZ062B equalisers originally appeared in the Klangfilm System, a console manufactured for mixing film sound, and became known for their effectiveness on voice.

Where the two RZ062 versions differ is in their third control. On the RZ062A, this is presented as a Mid control that offers a tilt-like function whereby the entire frequency curve is rotated about a centre point (650Hz). Turn up the bass, and simultaneously turn down the treble, and vice versa. 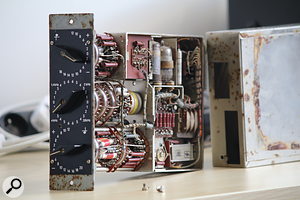 The original RZ062 from the Klangfilm System. The centre knob is the Presence control, available on Audified's RZ062B plug-in.The B version instead offers a Presence control. Four frequencies are available — 1400Hz, 2000Hz, 2800Hz and 4000Hz — and each has six 0.8dB steps of gain available up to a maximum 4.8dB, for subtle control over the frequency range vital for speech intelligibility.

The plug-ins can operate in stereo or dual mono modes and also have M-S functionality for group processing, mix bus duties and mastering.

In order to recreate the sound of the EQs, Audified have emulated over 200 circuit components, including triodes as well as input and output transformers. This modelling allows the valve saturation characteristics to be recreated and these can be dialled in with Input and Output level knobs, as well as a Set Calibration function.

Considering the original hardware units change hands for $12,000, the price tag of $199 is rather reasonable. And, until September 10th, introductory pricing is in effect making the RZ062 Equalizer plug-in bundle only $149. Audio Unit, AAX-, and VST formats are available and a 30-day free trial means you can test it properly before purchasing.