Blackhole in your DAW not your wallet

Eventide have announced a limited-time discount on the purchase of their Blackhole reverb plug-in. While most reverbs are constrained by the physics of the real world, Eventide’s Blackhole reverb creates virtual spaces that could never exist in our reality. At large sizes, its soft attack and lingering, harmonic tails allow it to really shine on guitars, strings and pads. At small sizes those very same qualities can help add an angelic sheen to vocals or turn a simple drum track into an otherworldly rhythm section. Blackhole is destined to be one of the tools that musicians, engineers and producers turn to time and again when reality just isn’t enough. 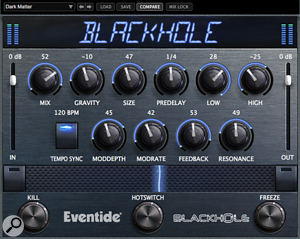 Blackhole is available at $49 -- a massive 75 percent saving on list price -- until the end of March, and owners of Anthology X qualify for an even more affordable $19 crossgrade.