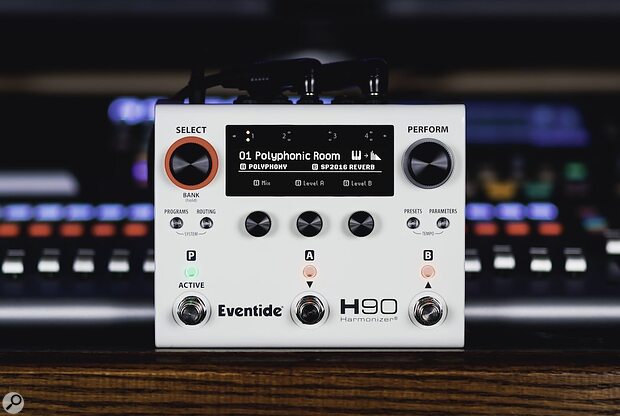 Eventide Audio have announced the release of the H90 Harmonizer, a multi-effects pedal which builds on the foundation of their H9 Harmonizer. The pedal utilises an ARM-based architecture derived from the company’s flagship H9000 Harmonizer unit, and includes 62 effects algorithms along with comprehensive I/O and flexible routing options.

The H90 is equipped with 62 effects algorithms along with hundreds of program combinations that have been curated for a variety of instruments and genres. Reverbs, delays, modulation, and pitch-shifting effects from the H9 Max are all present, along with seven new algorithms designed specifically to take advantage of the new pedal’s increased power, and three algorithms from the H9000 rack processor.

Each of the algorithms from the H9 Max have been enriched with features that were previously only available on the dot9 series pedals and plug-ins, and some have been enhanced to take advantage of the advanced pitch-shifting capabilities offered by Eventide's proprietary SIFT (Spectral Instantaneous Frequency Tracking) technology. A list of the new algorithms and their descriptions is as follows:

The H90's rear panel provides instrument and line-level I/O with two configurable insert points, as well as two external control inputs.The H90 allows two algorithms to be combined into a Program, with the pedal also providing series or parallel effects routing options. The device is equipped with two instrument or line-level inserts which can be placed anywhere in the signal chain, allowing users to incorporate additional outboard effects. The inserts are capable of operating independently in mono, or can be combined to act as a single stereo insert.

The front panel of the pedal has been designed to offer a wealth of hand-on control, and is equipped with five push knobs and seven LED buttons, as well as a hi-res OLED display to provide visual feedback. Two large push buttons at the top of the pedal offer users a quick way to switch between Select, Perform, and Bank modes.

When in Perform mode, device functions such as Tap Tempo, Preset, and Insert Bypass can be mapped to the device’s footswitches, which are also capable of engaging options such as Reverb Freeze, Pitch Flex or Delay Repeat. Further control is provided by three HotSwitches, which can be assigned to control multiple parameters simultaneously. There are also two inputs which will accept either expression pedals, auxiliary switches with up to three buttons, or CV control sources, and the pedal also offers extensive control of its parameters via MIDI.

A Playlist management provides a convenient way to organise sounds for gigs, with users able to quickly navigate through their patches using Select mode, whilst Bank mode offers players a way to quickly load sounds from a bank of three Programs, a feature which Eventide say is perfectly suited to cueing up a range of different sounds for a single song.

Editing of Programs and lists via a Mac or PC is also possible courtesy of a free H90 Control software application, which also be used to carry out firmware updates.

The H90 Harmonizer is available now from Eventide and authorised dealers worldwide, priced at $899.