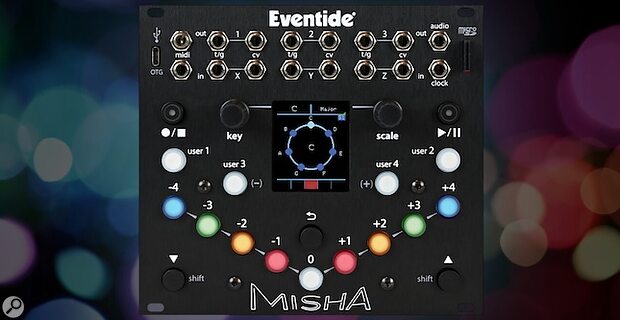 Eventide have announced that Misha, their new Eurorack instrument and sequencer is now available.

Misha is a 28hp module inspired by the twelve-tone composition technique, and centres around a tone row-based sequencer. Users are able to select a key and scale, and then step up, or down through that scale in the intervals (0, and +/- 1, 2, 3, 4) denoted on the module’s buttons. A clock division function allows the creation of rhythmic variations, and there are also control templates available which allow the module to be controlled by both MIDI and QWERTY keyboards.

As well as being equipped with a MIDI output and three CV outputs to sequence other modules, the device also features an audio output for its own internal oscillator. CV inputs are also present, accepting external trigger and control sources, and the presence of a clock input allows Misha's sequencer to sync to external sources.

There are 100 scales included from the factory ranging from typical Western scales, to microtonal, scales that use just intonation, and everything in between. An additional two banks offer an extra 100 slots to which users are able to upload their own scales using the Scala format.

We have a Misha on its way to us at Sound On Sound, with a review planned for a future issue of the magazine. We also got a demonstration of the module from Eventide at Superbooth 2022, which you can check out in the video below.

Misha is available now for $599 directly from Eventide and via authorised dealers worldwide. More information is available on the Eventide website.