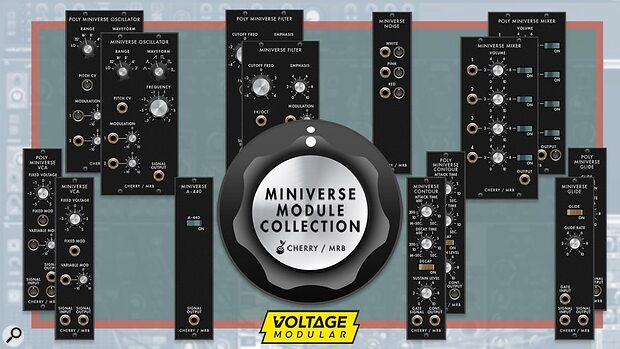 Cherry Audio have announced the release of the Miniverse Module Collection, an expansion of the company’s Miniverse virtual instrument into 14 flexible modules for use within their Voltage Modular platform. Cherry Audio say that all of the classic tone and mojo of the instrument remains, but with users free of the fixed, ‘hard-wired’ limitations of the original. The release also includes Poly versions of modules, which feature up to 16-note polyphony.

The Miniverse (formally Minimode) is a virtual emulation of the classic Minimoog synthesizer, which has been designed to be the ultimate tribute to the original instrument. The product of a collaboration between Cherry Audio and DSP expert Mark Barton (MRB), Miniverse is a meticulous recreation, with the company studying and measuring every nuance of the original instrument. Unlike many modern emulations of classic units, Cherry Audio say that they resisted the temptation to add additional features, instead concentrating only on portraying the sound and feel of the original synth.

The 14 modules included in the Miniverse Module Collection are: