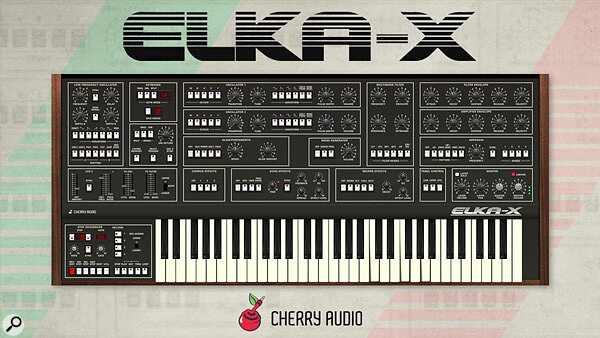 Cherry Audio have just released the Elka-X, a software synthesizer based upon the rare ELKA Synthex instrument. ELKA made the last Synthex for Stevie Wonder in the mid-80s, who used it for the distinctive bass tone on his single 'Skeletons' from the 1987 album Characters. Other notable users of the Synthex included Geoff Downes of the supergroup Asia, Keith Emerson, Nick Rhodes of Duran Duran, Peter Howell of the BBC Radiophonic Workshop, and Jean-Michel Jarre, who used it extensively on Rendezvous and for his famed 'laser harp' sound.

Cherry Audio say that they have precisely crafted each aspect of the Elka-X synthesizer to sound and behave exactly like a vintage hardware Synthex, and that every effort has been taken to emulate the prized tone of the original's DCOs, dynamic filter, and chorus. The innovative sound-sculpting and performance features such as layering and keyboard split have been preserved, and the 128-step sequencer has seen some improvements/refinements.

As with the company's other vintage synthesizer and effects products, Cherry Audio have aimed to preserve the sound and feel of the original instrument whilst updating its feature set to better fit in with modern studio environments. To this end, Elka-X expands the polyphony and filter modes, as well as introducing mono and unison modes that were absent from the original design. The extended functionality of the LFOs and addition of velocity response expands the instrument’s modulation potential, and the inclusion of an arpeggiator delivers welcome new performance possibilities.

Unique panel controls within the GUI make it quick and simple to exchange settings between layers, sequencer tracks, and even different presets. In addition to the original chorus effect, Elka-X has gained studio-quality echo and reverb stereo effects, with independent settings for both layers.

With additional touches such as chord memory, over 600 pro patches, and flexible MIDI mapping, Cherry Audio say that "Elka-X brings an authentic and expanded Synthex experience into the 21st century".

Elka-X is provided as both a standalone application and in AU, VST, VST3, and AAX plug-in formats for Windows and macOS, with native Apple Silicon support enabling the highest performance on Mac computers powered by M1 and M2 processors.

Elka-X is available now from SOS MusicTools, priced at $39.