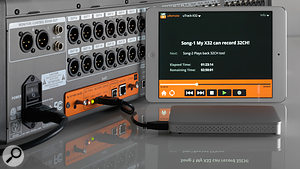 Cymatic Audio have introduced a new expansion card for the Behringer X32 and Midas M32 series of digital mixing consoles. Based on the same technology found in Cymatic’s uTrack24 live multitrack recording rack unit, the uTrack-X32 expansion card enables 32-channel recording directly from the console to a USB hard drive, with no laptop or DAW required. Meanwhile, 32-channel playback allows live engineers to carry out a full virtual soundcheck while the band are still in the hotel sleeping off last night’s show.

Sitting in the expansion card slot, the uTrack-X32 operates completely independently of the console, providing 32 channels of recording and playback at up to 24-bit/48kHz. The only limit on recording time is the size of the USB drive you attach. Designed for the live environment, the uTrack-X32 has a very simple interface, with a single ‘push to record’ button and an optional pre-record buffer to make sure you miss nothing even if you’re slow to hit record. You can also create new takes while recording without missing a second. The free uRemote application for Windows, Mac OS, iOS and Android provides additional control options, letting you create location markers while recording, browse through songs recorded on the hard disk, start playback from any point in a song and create playback loops on the fly for soundchecking purposes. Large transport buttons and detailed status information are also provided.

A big part of this device’s appeal is the ability to record a live gig quickly and easily, without having to set up a new session in your DAW, select inputs, arm tracks and so on. However, if you do want to use a DAW, the uTrack-X32 will also function as a 32-in/32-out USB audio interface, compatible with Windows, Mac OS and iOS. Another bit of free software from Cymatic Audio – the uTool app – lets you extract mono WAV files from the songs you’ve recorded and import them into your DAW. Meanwhile, the uTrack-X32's Ethernet port lets you connect to a Mac or PC for control or to a wireless router (sold separately) which allows numerous operations to be remotely controlled from smartphone, tablet, or laptop using the free uRemote software.

Cymatic Audio’s uTrack-X32 expansion card should be available by the end of September and the MSRP is 799 Euros.