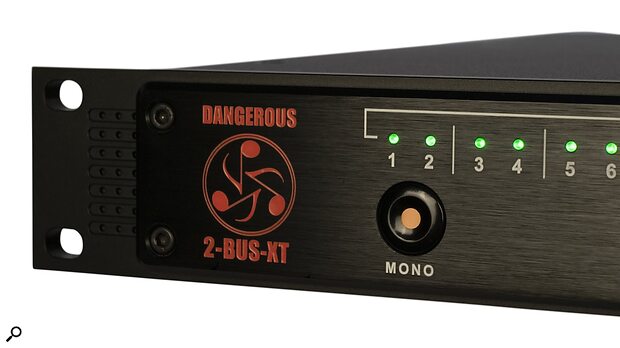 Dangerous Music have introduced the 2‑Bus‑XT, the next generation version of their 16‑channel analogue summing mixer. Previewed at NAMM 2022, this latest model has been completely re-engineered and comes equipped with new transformer-driven circuitry that offers some unique colouration options.

The new unit utilises the circuitry developed for the 2-Bus+ by Dangerous Music co-founder Chris Muth, which the manufacturer says was designed to produce "super-wide stereo imaging" and an "high-resolution depth of field" whilst offering a large amount of headroom. Unlike summing units that are designed to impose a ‘colour’ on connected audio sources, the 2‑Bus‑XT provides two circuits that allow users to dial in as much, or as little colouration as they please.

The front panel of the Dangerous Music 2‑Bus‑XT.

The transformers used in the two new circuits introduce second order harmonics to the source signal and were selected for the task following extensive listening trials. A variable Coherence control operates in a similar manner to parallel compression, progessively elevating harmonic content and blending the results with the source mix. The colour circuitry can be assigned to channels 15 or 16 (or both), to the main mix bus, or to an aux send from the user's DAW. The switches for each of the circuits offer a true hard-wired bypass.

Two mono buttons across input pairs one and two, as well as pairs nine and 10 enable sources such as vocals or kick drums to be placed in the centre of a stereo mix, and a sum level output allows users to manually fade a mix or to set a level before analogue to digital conversion or final mix bus processing.

Multiple 2‑Bus‑XT units can be combined to accommodate higher channel counts though the external input. The unit can also be paired with the Dangerous 2-Bus+ to offer a total of five different analogue colour circuit options, or with the D-Box+ to provide comprehensive monitor control along with 24 channels of summing.

The 2‑Bus‑XT's 16 summing inputs are provided on a pair of DB25 connectors, whilst two stereo outputs and a stereo input for expansion are all present on XLRs.

The 2-BUS-XT is available to pre-order now through any Dangerous Music dealer, priced at $1999 with shipping scheduled for Q4 2022.