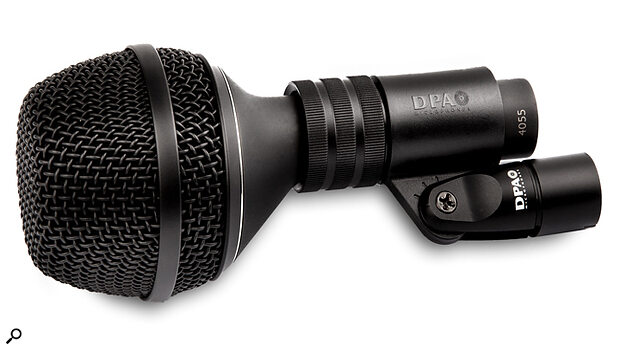 DPA have announced the 4055 Kick Drum Microphone, a new condenser microphone which, as the name suggests, has been designed specifically for use on kick drums. Rigorously tested to perform in a variety of applications and suited for use both live and in the studio, the company have taken their usual approach of designing the microphone to deliver a natural sound with no pre-tailored voicing, allowing engineers to shape the captured sound exactly as desired.

As with all DPA microphones the 4055 exhibits a frequency response that is flat on-axis, with a controlled and linear off-axis response. Given the intended application it has been designed to withstand high levels of sound, boasting a maximum SPL handling of 164dB. This allows the sound of the microphone to be tailored with the placement, with the 4055 demonstrating different sounds when placed at varying angles to the drum, unlike many other kick drum microphones.

The microphones shape makes it easy to position, and it can easily be placed inside or in front of a kick drum without issue. Ample wind dampening foam is enclosed behind the grille, protecting the capsule from turbulence when placed in front of a drum hole. DPA say that in addition to being used on kick drums, the 4055 also works equally well on other instruments such as electric guitar cabinets, bass, brass and horns.

The 4055 is available now, with pricing starting at 560 Eurospricing available through approved DPA distributors.