Earthworks, perhaps better known for thier microphones, will be launching a reworking of a their 1021 preamp to fit the ubiquitous 500 series format. See more below. 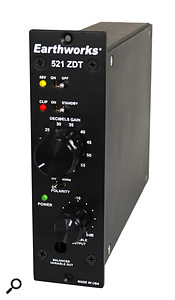 Earthworks 521 ZDT 500 series preampPress Release: Earthworks will introduce its first 500 Series module, the 521 ZDT at the 2013 NAMM show this week in Anaheim, California.

Based on the ZDT Preamp technology designed by David Blackmer, the 521 ZDT brings the exacting standards of the Zero Distortion Technology preamplifiers to the convenient 500 series format, providing a “wire with gain” option to the 500 series rack.

The Earthworks mic amp topology provides outstanding common mode rejection, excellent overload margin and an incredibly low noise floor, combined with the ultra wide bandwidth of the ZDT Preamps (1Hz to 200kHz +0.5dB) and distortion of less than 1 part per million (0.0001%). This exceptional level of performance is maintained over an extensive range of impedances applied to the input, making the 521 ZDT suitable for practically any microphone – ribbon, dynamic or condenser.

The 521 ZDT is expected to ship Spring 2013. The retail price is yet to be announced.