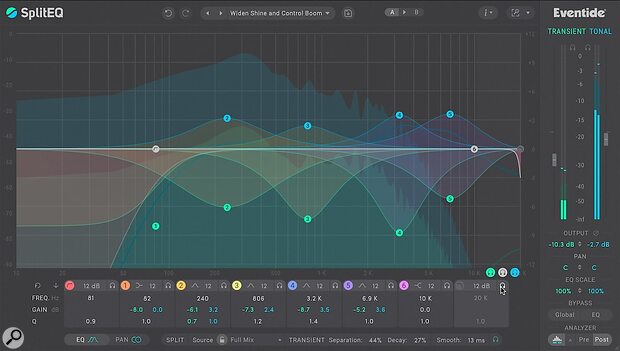 The latest plug-in from Eventide is an EQ with a difference. SplitEQ employs a new, patented technology called Structural Split to let you process the attack and sustain portions of a frequency band independently of one another.

Described as “a new approach for corrective and creative rebalancing, enhancing, repairing and widening” audio, SplitEQ offers eight parametric bands, and can operate in mono, L-R stereo and Mid-Sides modes. Its real-time analyser lets you home in on trouble spots in your audio, and you can even solo either the transient or sustain elements in it, either across the entire spectrum or within a specific frequency band.

“Whether you're working on individual tracks, a full mix, or cleaning up a two-track loop,” say Eventide, “you'll find SplitEQ to be an inspiring and powerful tool that allows you to approach material in a new, musically and sonically meaningful way.”

SplitEQ is available to buy now for the special introductory price of $99 (normally $179), and we look forward to trying it out in a full review soon! In the mean time, check out the video below to see how it works.