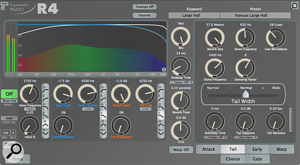 Some of the most revered algorithmic reverbs, specifically those made by Lexicon, are the work of Michael Carnes. His company, Exponential Audio, are now using Carnes’ know-how to create a brand new reverb plug-in that promises "all the class of historic hardware reverb units but with many new features only possible with modern plug-in development technology.”

While the company’s Nimbus processor was all about generating transparent reverb with unprecedented flexibility, R4 has the same goal but with character reverb. Exponential say "R4 will transform your mix by adding movement and fatness to the reverb tail.”

R4 is being described by its makers as “a character reverb that outdoes the classics”. A bold claim indeed, but it could be well-founded considering its impressive features: six selectable types of filter for input, early reflection, and reverb tail; early and tail EQ that can be dynamically modulated; the 'Chorused Hall’ preset and a second Hall with density modulation that adds motion to the tail without adding pitch change; Plate and Chamber algorithms; warp section with compressor/expander and overdrive; pre-delay and reverb delay are now adjustable by tempo; tail suppression circuit for more dynamic response; ‘Freeze' button; gated reverb effects; over 1200 presets; tool-tips to guide new users.

R4 is on sale at $299USD/€289EU with a free 21-day trial available. It will be shipping on March 10th and existing customers will enjoy special pricing.