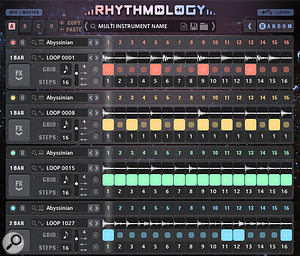 Rhythmology from Sample Logic pairs a dynamic, rhythmic sequencing and effects engine with a huge loop library comprising sounds suitable for a huge range of styles. The included loops, have each been hand crafted by the professional producers at Sample Magic and Soundtrack Loops. Sample Logic are so confident in Rhythmology that they are calling it "the last loop player and groove engine anyone will ever need.”

At the centre of Rhythmology is Sample Logic’s dynamic 'Multi Core’ sample engine. It allows stacking and shaping up to four loop sources simultaneously inside four loop cores and the ability to experiment with dozens of available dynamic audio effects, including reverb, delay, filters, distortion, and more. This means you can create anything from the simplest fundamental beat right through to elaborate, massive-sounding looping rhythmic and melodic productions.

Within Ryhthmology loops are divided into rhythmic segments, each of which can be ordered and re-ordered into any playback order, sequence, and combination. Each segment can also be effected independently using built-in static effects, such as stutter, transpose, reverse, volume and pan automation. Segments can also be affected using hot-swappable dynamic effects animation, all of which form part of loop sequences. Each effects module is sequenced on a per step/segment basis or can alternatively be set to user-defined tempo resolutions.

Sample Logic have also equipped over a dozen parameters within the Rhythmology interface for randomization, allowing users to rapidly tap into over a trillion starting point combinations with creative effects.