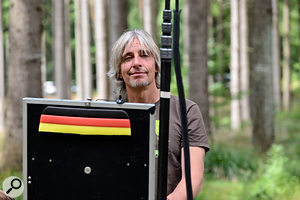 Press Release: Shortly after the CEDAR DNS 2 was announced, Andreas Kluge, who has worked for 20 years in the fields of TV movies and series, cinema and advertising, became its first user in Germany when shooting episodes of the TV series 'The Family of Dr. Kleist'.

Having tested the DNS 2 before deciding to purchase it, Kluge told us, "Although the quality of CEDAR products is well known, deciding whether or not to use dialogue restoration on set can be critical. But it turns out that the DNS 2 can be an immense asset in our work. Preparing for my first shoot using the DNS 2 was promising due to its simple operation, and my first impressions of its sound were encouraging. On the set, it then proved able to reduce unwanted background noise significantly in almost any situation, without changing the intrinsic sound of the original recordings and voices. Together with the director, I used headphones to compare the CEDAR processed signal directly with the original and, in most cases, it was both impressive and motivating to hear the improvements. Of course, you should use the DNS 2 carefully, but its simple controls make it easy to find the right balance. Actually, the DNS 2 does most of the work itself and, in general, the operator needs only to adjust a single knob. Of course, there are situations where the DNS 2 is reaching its limits, but even these can be useful because they help me to make decisions about obtaining the best recording on set."

"Before I purchased a DNS 2, I wanted to hear the reactions of my colleagues to the mix. It was positive, and using the DNS 2 helped to make the sound of multiple 'takes' more homogenous even without further processing. In addition, large jumps in atmos levels are significantly reduced by the DNS2, eliminating the need for ADR."

Kluge sums up his experiences with the DNS2 as follows. "Although there is no substitute for careful sound work, the DNS 2 makes it possible to be more flexible on set and obtain higher quality mixes, which is especially valuable with increasing recording workloads and cost pressures in post-production."