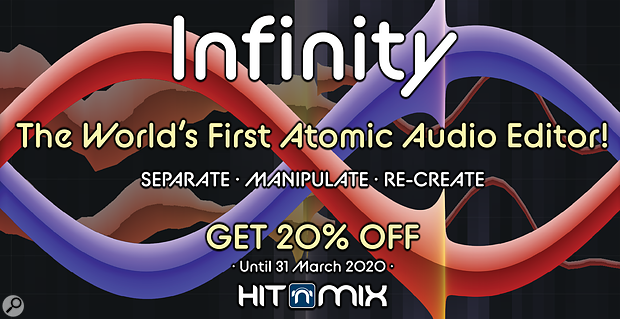 Back in January, we reviewed Infinity, the remarkable audio-separation software from UK developers Hit’n’Mix — see www.soundonsound.com/reviews/hit....

Infinity allows you to import any audio file and then edit its constituent parts, using an interface that looks like a cross between a spectral editor and a piano-roll view. Individual elements within the audio file (or ‘Rip’) can then be manipulated independently, so you can (for example) delete a vocal part, isolate an instrument, or change a part’s pitch.

Now this intriguing ‘mix deconstructor' has received a major update, to version 4.5. Update highlights include the ability to import your own samples as Rips, to be painted onto other audio; background and foreground noise removal; new tools including Draw, Replace, Cut and Join; enhanced navigation abilities such as zoom and loop markers; improved bpm detection; and much more.

To celebrate this major update, Hit’n’Mix are offering a 20 percent discount on Infinity, right up until the end of March. If you’re unsure whether to take the plunge, a free one-month trial is available, and the company have also made a series of tutorial videos available on their website — see the link below.