IBS, the Institute of Broadcast Sound, have announced a weekend of training, to be held at the National Film & Television School in Beaconsfield from Saturday 29th to Sunday 30th January 2011. 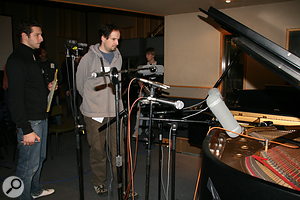 Topics covered will include digital recording, timecode and synchronisation, surround sound (including Dolby E encoding and decoding), loudness, and wireless microphone technology — specifically, the upcoming change in radio frequencies available for them.

As well as the talks and seminars, the training weekend will also see a number of hands-on sessions and demonstrations from various equipment manufacturers and service providers. Attendees will also get the opportunity to try their hand at mixing complex sessions, on both analogue and digital systems using various different multitrack sources. And for those who want to broaden their horizons, there will be masterclasses in both video lighting and camera operation.

In the past, IBS training weekends have been residential, and run only on a whole-weekend basis, but this time they’re giving attendees the chance to attend days individually. For those who want to attend both days, however, the IBS will assist in finding them accommodation at a nearby hotel. The weekend will include a group dinner with guest speaker on the Saturday evening.

Prices range from £114 per day for IBS members, to £234 for the whole weekend, for non-members. Members of the Association of Motion Picture Sound (AMPS) also get a discount compared with non-IBS member prices. For more details, email trainingweekend@ibs.org.uk, or check out the IBS web site, below.