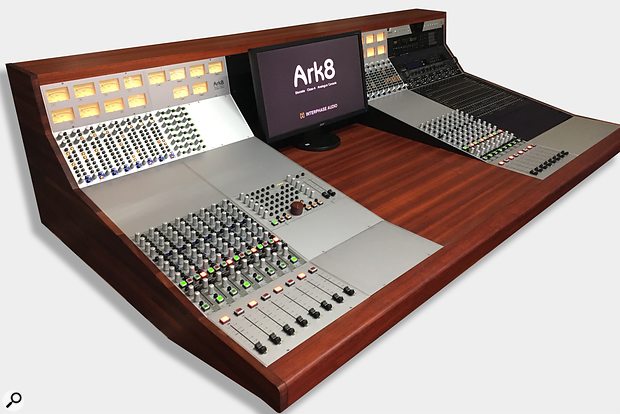 Just before Christmas, Bruno Wynants of Interphase Audio drove his car from Belgium all the way to the Sound On Sound headquarters near Cambridge. Squeezed into the back was an eight-channels-plus-masters prototype of his company’s new large-format mixing console, and we were fortunate enough to enjoy an exclusive first hands-on look at this impressive and imposing new design, called the Ark. 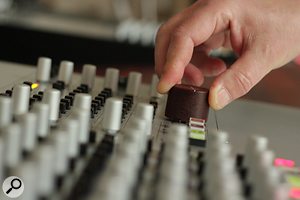 Although the name is carried over from an earlier joint venture with Malcolm Toft of Ocean Audio (who has now retired from the audio industry), everything else about the Ark is brand new and designed from the ground up by Bruno together with the highly regarded British pro-audio designer, Allan Bradford (who also came along to discuss the design with us). Although better known for his countless outboard equipment designs, Allan has been toying with innovative ideas for a full console for many years, and his partnership with Bruno to build the Ark has finally allowed these to come to fruition. Work started on the console design in 2016 and it has taken around 18-months to develop the architecture and detailed circuit designs to the point of a fully working production console – and it’s all hand-built in the EU.

The Ark is a fully modular and configurable in-line multitrack recording console, optimised for modern workflows and production requirements and, although it is a serious investment, the cost is actually considerably lower than might normally be expected of a console with this build quality, styling, feature set, flexibility, technical performance, and sound quality. 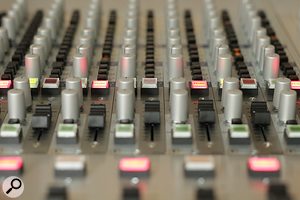 Discrete Class-A circuitry is used throughout, running on 48V supply rails to maximise headroom, and with symmetrically balanced mix-buses capable of accommodating up to 128 audio channels. The construction is based on separate mechanical buckets holding either eight input channels, eight sub-groups, or the master section, and a console can be expanded at any time if required. There are also options for a double-wide producer desk and an integral patch-bay.

Each bay accommodates five separate module sections, angled with increasing slopes from the faders to the meters. The middle two of these sections can be specified to accommodate built-in 500-series racks (with compatibility for the 51x format, too), if required, each section accommodating 16 modules. Although physically housed in line with the channel strips, the audio I/O for these modules is kept separate from the console channel strip’s dual signal paths, and terminated on D-sub connectors on the rear panel for patching as required. 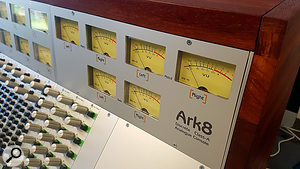 The console’s meter-bridge carries illuminated VU meters for the channels and main outputs, and below these are slots for three variations of input module. The standard IP111 module accepts a mic-line input and a separate DAW return, each feeding the two in-line signal paths through the channel strip (Small Fader and Large Fader). This module also includes direct output controls and bus-routing facilities (with routing to eight sub-groups and two stereo main outputs).

Alternatively, the IP115 input module replaces the mic preamp with a second line or group input allowing it to serves as a group master channel, if required, while the IP125 input module option is configured for stereo line sources and may be used for stereo FX returns, for example.

The middle section of the console can either house dual 500-series slots, or the IP211 four-band inductive EQ section. This module is equipped with four short faders to change the amount of boost/cut in each band – reminiscent of the classic Trident A-series consoles – and also includes adjustable high- and low-pass filters plus a ‘swing’ or ‘tilt’ EQ, with each separate section being switchable into the Small or Large Fader paths as required.

Moving down to the lower section, two more modules options are available. The standard IP311 module provides controls for four mono and two stereo aux sends, with individual pre/post switching. Expanding the console’s versatility considerably, these aux sends can also be switched in pairs to between either signal path and to access the console’s full complement of eight mono and four stereo aux busses. The various pan, mute, and solo facilities are also included for both signal paths, as well as the Small Fader. The alternative IP321 module complements the IP125 stereo input module in providing the appropriate aux bus sends and stereo balance/pan controls. 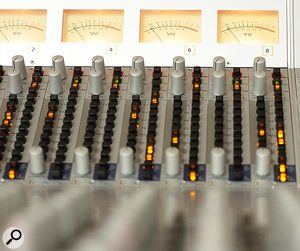 Bringing up the bottom of the channel strip are the fader modules, with either eight mono (IP401) or eight stereo (IP421) manual faders. However, equivalent modules with fully motorised and automated faders are currently under development.

Moving on to the master section, the lower part of the bay accommodates a very comprehensive monitoring system with support for stereo, 2.1, 5.1, and 7.1 monitoring arrays, plus two artist cue systems, plentiful external monitoring inputs, and talkback facilities. There are also two large master faders and a control to adjust the level of illumination for all of the console’s buttons and indicators to suit different working environments and preferences, which is a very nice touch! An optional DAW transport control panel can also be installed below the monitoring panel if required.

As with the input channel bays, the centre of the master section bay can accommodate 16 more 500-series modules, if required, while the upper section contains the bus master controls for the eight sub-groups and the 16 aux sends while six VU meters are provided for the two main stereo outputs, plus the (stereo) solo monitoring bus.

An external rack-mounting power supply is connected at the rear of the console, along with a second separate supply to power any bays fitted with 500-series slots. The audio connectivity is all on AES59 D-sub connectors, with separate I/O for the 500-series slot frames, and there are dedicated external inputs to all the mix busses to allow easy integration of a side-car console if required.

My initial impression of the Ark is that it appears to be a very well-conceived and beautifully engineered console, designed with considerable flexibility in mind to enable customisation for a wide variety of potential applications and size requirements. The set of modules available at launch is equally impressive and should meet the needs of most clients, but there are advanced plans for additional future options. For example, the master section ships with provision for a planned future plug-in digital interface module with the intention of offering a direct connection to various DAW platforms via HDX, Dante, or other digital formats.

Sound On Sound will be reviewing this console in depth in the very near future, but in the meantime, more information can be found on the company’s website