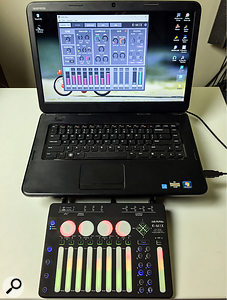 We were really impressed by the K-Mix from Keith Macmillan Instruments when we reviewed it back in the July issue of SOS.

We described it as a “one-of-a-kind combination of programmable digital console, audio interface and DAW controller that has no moving parts, is light in weight and is smaller than a large paperback” and now, its unique feature set is available to Windows users, in addition to those running Mac OS X and iOS. With the latest release of K-Mix Editor, compatibility is extended to Windows 7, 8 and 10 (64-bit only).

The K-Mix hardware, which sports a precision opto-tactile control surface, designed from the ground up to command any DAW, combined with ten outputs and eight inputs — two of which feature ultra-accurate, low-noise μPreTM proprietary preamps.