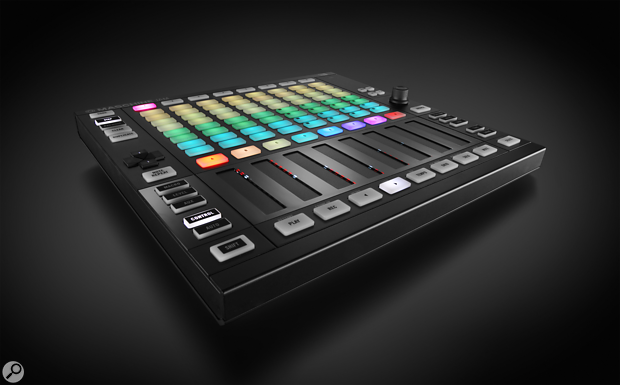 Native Instruments have today announced Maschine Jam, a brand new addition to the Maschine family which is focused more on sequencing, arrangement and performance than MPC-style beat making. As you’d imagine, it integrates perfectly with the Machine software and other NI instruments, but also doubles up as a controller for Ableton Live, with a template included.

We’ve had one for a little while and you can read our verdict in the October issue (on sale September 22).

The heart of the Maschine Jam is an 8x8 multicolour click-pad matrix. In Step mode it’s a powerful multi-track step-sequencer for one, four, or eight sounds simultaneously. Meanwhile, in Pad mode, sounds are entered in real time, while Piano Roll Mode makes step-sequencing melodies in a wide variety of available scales possible.

What also sets it apart from competitors, is the inclusion of eight dual-touch Smart Strips. These multi-purpose controls are very similar to those found on the Komplete Kontrol S keyboards. All-new Perform FX map one of several effects to JAM’s touch strips, letting you simultaneously grab and automate a parameter with each finger. The Smart Strips each feature multi-color LED meters to monitor the level of the assigned function, and can be used to alter macros, key instrument parameters, and even play melodies and chords with the unique Notes function. A powerful Lock function stores parameter snapshots that can revert back to their original settings or morph between multiple lock states.

On top of this is a Variation engine beats and melodies are randomly generated based on customisable values and then modified on the matrix. A built-in humaniser can then add natural rhythmic fluctuations to programmed sequences.

The Maschine Jam is designed to work as either the sole controller for Maschine 2.5 software or as a complement to other Maschine hardware, and it comes with NI’s ubiquitous Massive and Monark synths as well as the powerful Maschine Drum Synth modules. Maschine 2.5 software also features a revised 9 GB library updated with all-new sounds and macro controls.

Maschine Jam is billed as integrating seamlessly within any DAWs as a plug-in, and provides extensive DAW control as a dedicated controller in MIDI mode. It can also be custom-mapped to control any other MIDI capable software.

Native Instruments are also running an introductory offer until December 31st, where Maschine 2 software owners get the choice of two Maschine Expansions from an eligible 20 – free with any registration of Maschine Jam.