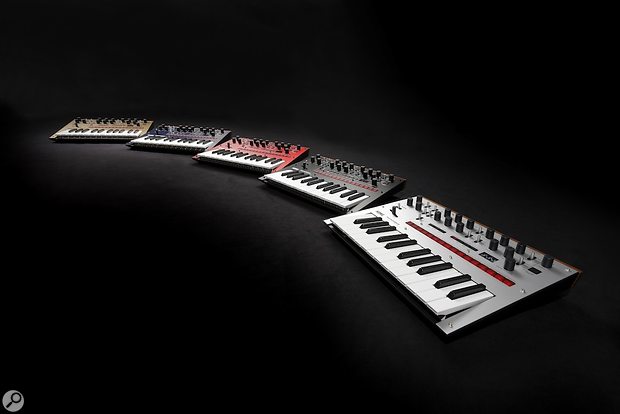 At the beginning of the year, Korg took us all by surprise with the Minilogue, a great-looking, great-sounding, genuinely analogue and genuinely affordable polysynth. Now they’ve done it again, announcing a monophonic successor called the Monologue that’s set for release in January 2017 at an even lower price point.

With a name so on-the-nose it’s amazing no one has thought to use it before, the Monologue is a monophonic analogue synth. It takes its style cues from the Monologue, with a wooden rear plate and angled metal control panel, cut straight this time as opposed to the Minilogue’s stylishly swept curve. It’s smaller too, with a two- rather than three-octave ‘slim’ keyboard, and comes in wider range of colours – anodised black, dark blue, gold and red are all available in addition to the familiar silver. Neat Minilogue features like the mini OLED oscilloscope display and diagonal pitch-bend stick have been retained, while the 16 backlit step sequencer buttons are a notable addition. The Monologue can also be battery-powered, with six to eight hours of operation promised from six AA cells.

Like the Minilogue, it’s equipped with main and headphone audio outs, an external audio input, MIDI and sync in and out, and a USB connector. In terms of sounds, Korg say that their new synth will offer a rather different palette, thanks to a more aggressive two-pole filter and the addition or a drive circuit. Alongside powerful bass and lead sounds, complex rhythmic sounds are apparently also on the cards courtesy of the updated step sequencer, which includes motion sequencing and key-triggered transposition of sequences in real time. Korg say that the Monologue also boasts micro-tuning capabilities and a range of presets voiced with input from Richard D James (aka Aphex Twin). Best of all, the Monologue is expected to be extremely affordable, with a projected UK price of £299 with the first units arriving in January.

Korg have also defied expectation in releasing a synth-modelling iPad/iPhone app: the ARP ODESSEi. Based on the classic ARP ODYSSEY that Korg re-released in hardware form only last year, the app models the circuit of the original synth and works both in standalone formats and with the Korg Gadget app. Now that the Odyssey sound has been transferred to the iOS platform, other previously lacking functions have been added including polyphony, built-in effects, XY pads and preset recall.

The basic purchase will cost £14.99 and features a model of the Rev3 circuitry, while sought-after Rev1 and Rev2 skin and program packs can also be purchased from within the app for £3.99 apiece. ARP ODYSSEi from Korg is available now from the Apple App Store.