Focusrite have just announced a newcomer to their Saffire range of audio interfaces. The Saffire Pro 14, as it is known, is a compact six-input, six-output Firewire device that can be powered either by the included PSU or, usefully, via your computer’s Firewire bus power. 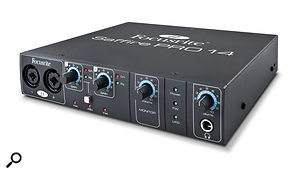 The front panel sports two dashing Neutrik Combo sockets that lead to a pair of Focusrite’s Saffire preamps. These can provide up to 60dB of gain and phantom power to mics, or they can accommodate line- or instrument-level sources on quarter-inch jacks. The preamps are accompanied by LEDs that indicate the presence of a signal, an overload, phantom power status, and the use of the instrument input, while to the right of the preamp section is a knob labelled Monitor, which changes the level of outputs 1 and 2 (located around the back), thus functioning as a rudimentary monitor controller.

Moving further to the right of the front panel, there are three LEDs that signify the unit’s power status, Firewire connectivity and sample rate locking, while over at the far end is the headphone output, with its own level control. The headphone output duplicates the audio sent to line outputs 3 and 4, making it possible to create separate foldback and control room mixes.

Moving around to the back, we have two more line inputs, plus four line outputs (all on balanced quarter-inch jacks). The audio I/O array is completed by a stereo S/PDIF input and output, both of which are on coaxial RCA sockets, while a pair of five-pin DIN sockets handle the MIDI input and output duties. A Firewire socket and the PSU input conclude the assortment of orifices.

Like its Saffire siblings, the Pro 14 can run at up to 24-bit/96kHz quality, and comes with Focusrite’s MixControl software, which allows you to route any input or output to any other input or output. A handy feature called Loopback also lets you send two channels of audio from one piece of software to another (between DAWs, for example, or from a browser or media player to your DAW). Furthermore, with v1.7 or later of MixControl installed, it can run in stand-alone mode, where routing settings (as defined when connected to a computer) are saved, and the preamps, headphone amp and A-D/D-A conversion can be used on their own, without a PC or Mac being connected.

Included with the Saffire Pro 14 is the Focusrite Plug-in Suite, which comprises dynamic processors, reverb and EQ plug-ins (in both VST and AU format), the Novation Bass Station soft-synth, an Ableton Live Lite 8 licence, and over 1GB of Loopmasters samples. Available from this month, the Focusrite Saffire Pro 14 will set you back a mere £199, including VAT.