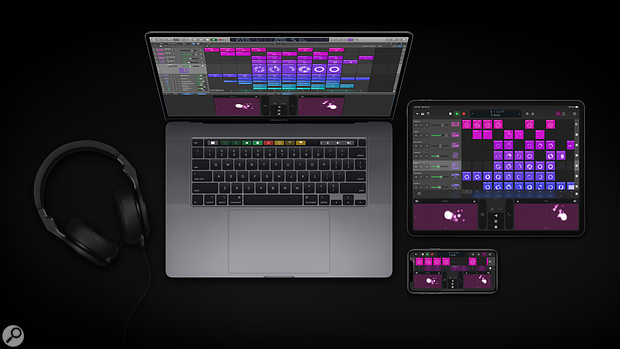 Apple have described Logic’s move to v10.5 as the biggest update since Logic Pro X, and it's easy to see why. Among the list of new features is Live Loops, a gridular, Ableton-esque view that allows you to launch clips in nonlinear fashion for on-the-fly arranging.

The long-standing EXS24 software sampler has also been given a welcome overhaul, and has been renamed to Sampler. Apple tell us it offers enhanced automation, a streamlined UI, and an elegant drag-and-drop system for loading sounds. The new Sampler is accompanied by a cut-down version, called Quick Sampler, which sacrifices a little depth in favour of spontaneity and easy access to routine sampling tasks.

A step sequencer has also been added, and the included Drum Machine Designer has been enhanced with new sampling and drum synthesis abilities.

The Logic Remote iOS app that allows you to control Logic from an iPad or iPhone has been slated for a major update, which will allow it to trigger sounds in real time when Logic is in its Live Loops mode.

Finally, it should be noted that Logic Pro X 10.5 requires OS X Mojave to run.