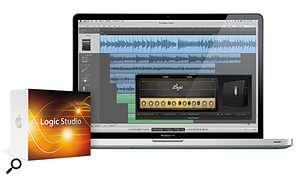 Flex Time is an assortment of tools that can help to tighten and loosen recorded audio in real time. The Flex Tool can be used to move individual beats in an audio region without having to manually slice the waveform, and an Audio Quantise feature lets the Logic user quickly and easily apply quantisation to slices according to a musical grid, as has been possible with MIDI for years.

A Varispeed processor can be applied to recorded audio, in case the engineer wants to lift the tempo in a chorus after the tracking session, for example. Cleverly, with Flex Time, Logic can automatically match the tempo of numerous audio recordings from different projects, even if they were recorded at different tempos.

Guitarists will love Logic Pro 9 for the new Amp Designer and Pedalboard processing plug-ins. Their names are fairly self-explanatory, and together they equip the user with software models of 25 different amp heads, 25 speaker cabinets, and 30 stomp boxes, for creating custom virtual guitar rigs. Mainstage 2, updated for the latest release of Logic Studio, can be used to access the new guitar-processing plug-ins, so live musicians can run instruments through their customised amp setups on stage. Mainstage's new ‘loopback’ input even allows solo players to build up looping layers, so they can jam along with themselves!

Also updated for Logic Studio 9 is Soundtrack Pro, which is now on version three. It has a new editing tool that usefully “extracts volume information from the vocal content of one clip and applies it to another without altering any other audio content”, as well as a spectral editor that lets the user select and edit audio based on frequency content. Rogue glass chinks and pop-shield knocks can be a thing of the past!

Logic Studio 9 costs £399 and is available now. Upgrades from earlier versions of Logic Pro and Logic Studio cost £159, while it’s £249 to upgrade from Logic Express.