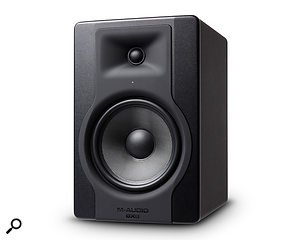 The larger of the two new models from M-Audio, the BX8-D3M-Audio have announced the introduction of two new studio reference monitors, the BX5-D3 and BX8-D3. The company’s latest efforts in the monitor space are both compact and affordable — £100 and £125 each, respectively — and boast rigid Kevlar woofers, treated silk dome tweeters and on-board, Class-AB bi-amplification.

The new BX-D3 range also features XLR balanced and 1/4-inch balanced/unbalanced inputs for connecting a range of different studio gear, a computer-optimised tweeter waveguide for enhanced imaging, low-end response controls to allow for placement near walls, and an onboard volume control.

What separates the two ported monitors is amplifier power, driver size and, consequently, frequency response. The smaller of the two — the BX5-D3 — sports a 100W amp driving a five-inch LF driver and one-inch tweeter with a quoted frequency response of 52Hz to 35kHz. Meanwhile, the BX8-D3 has a larger 150W amp that drives an eight-inch woofer and 1.25-inch tweeter. This larger model has a quoted response of 37Hz up to 22kHz.