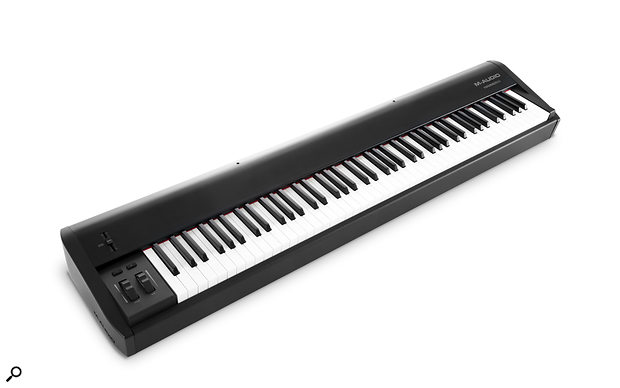 M-Audio have today announced their brand new Hammer 88 keyboard controller — a stripped down MIDI controller that offers a real piano feel and 88 keys for only £379/$399. If you're a student composer or recordist, or just someone who prefers the feel of weighted keys and doesn't have huge amounts of cash, this will be up your street.

The keyboard features 88 full-size, fully-weighted hammer-action keys which is something of a rarity at this price point. The Hammer 88 is also bus-powered over USB, so there aren’t extra cables hanging around. USB also provides MIDI connectivity, but if you want to trigger external hardware, you can take advantage of the 5-pin MIDI out and power it via an optional mains adaptor.

Because it’s a class-compliant USB device, it will also work with iOS. A perfectly feasible practice setup could involve setting up your iPad on the included music rest and playing virtual instruments in Garageband, for instance.

Hammer 88 boasts a core range of controls, including a unity-locking pitch wheel and a separate modulation wheel to add portamento and glissando effects. With the dedicated Master Volume Fader, players can control the intensity of their performance or MIDI map to any compatible parameter in a DAW or virtual instrument collection for expanded, hands-on control. With the assignable Up and Down buttons, players can select different programs, effects, MMC messages, jump between octaves and more. This is all controlled with the included Hammer 88 Controller Editor, which also supports multiple keyboard zones for layering and splits. You also have inputs for Sustain, Expression and Soft pedals.

According to M-Audio, Hammer 88 will be shipping in Summer of 2017. We look forward to finding out how that hammer action feels.