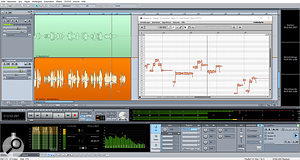 Since their acquisition of several Sony Creative Software products including Sound Forge and the Acid series, Magix are now underscoring their ambitions in high-end audio with the announcement of Sequoia 14.

Sequoia has a long-standing and loyal following within broadcast, mastering and post-production facilities. The latest version adds a series of features designed for the needs of big-studio audio and broadcast engineers. These features include Celemony Melodyne integration, audio-to-MIDI functions and the ability to automate tempos, all of which are easily accessible within a conventional workflow.

Sequoia 14 now also comes with SpectraLayers Pro 4, giving users the chance to take advantage of its unique, layer-based concept for working with frequencies. In international film studios, SpectraLayers has long been highly regarded for audio restoration and sound design, meeting the high demands of engineers when it comes to spectral editing.

On the mixing and broadcast front, Sequoia now offers tight integration with the Pro Tools S6 Controller, Avid’s high-end mixer. Thanks to the use of EUCON protocols, Sequoia can now also be controlled using the iOS app developed by Avid.

Sequoia 14 is available now for $2975. We look forward to hearing more from MAGIX — they already have plans to release further updates for Sound Forge later this year.