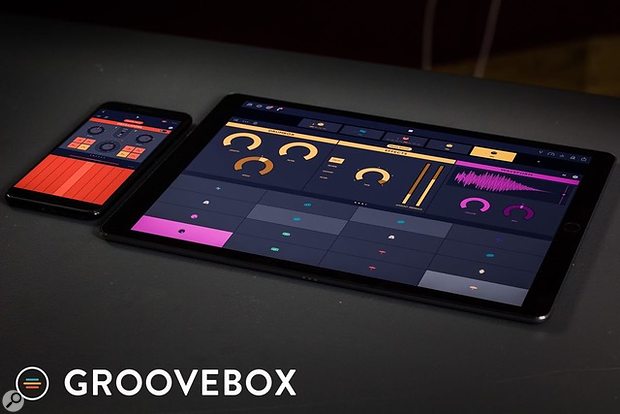 Building on the success of the Launchpad iOS app, which has reached a staggering seven million downloads, Novation have released a new free music creation app designed by AMPIFY, their in‑house iOS development team who are also responsible for Blocs.

Groovebox, which is described as a mobile music studio, comes with three built‑in instruments — the Drumbox beat creator, Retrobass analogue‑style bass synth and Poly‑8, an eight‑voice polyphonic synthesizer. The synths have an impressive lineage too, both having been developed in partnership with the synth experts at Novation.

Additional instruments, soundpacks and the ability to drill down into deeper instrument parameters, will be available via in‑app purchase, and up to eight instruments can be run simultaneously.

Designed with immediacy and ease‑of‑use in mind, Groovebox will allow users to play instruments directly (with an optional SmartKey function to adhere to a set scale), draw in notes on a pattern sequencer or load existing patterns. There’s also a built-in iPad mixer for balancing your tracks.

If you’re running a little low on inspiration, Groovebox has hundred of patterns and sounds to get your creative juices flowing again.

Interestingly, Groovebox also lets you export projects to Ableton Live as well as bounce down individual tracks or complete mixes. It also promises to play nice with other iOS music apps via either Audiobus or Inter‑App Audio. You can also play along with other computers and devices that have Ableton Link functionality for wireless, tempo-synced jamming.

Groovebox for iOS is free to download with various functions available as in-app purchases. All instruments can be expanded to show more controls for deeper editing at $4.99, £4.99, €5.49. Each instrument also has a soundpack store. Soundpacks are either Drumpacks (with samples & patterns), or Presetpacks (with presets & patterns) costing $1.99, £1.99, €2.29 each.

Check out the intro video here from AMPIFY.