'Man who sold the world on sampling' passes away 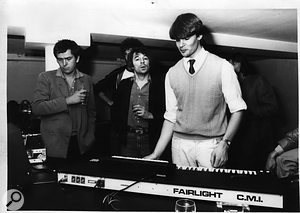 Stephen Paine (right) with cousin Peter Gabriel (left)It is with regret we note the sad passing of Stephen Paine, co-founder of Syco Systems and The Tyrell Corporation at his home in Phuket, Thailand last month. Stephen's career in bringing revolutionary music technology to the world began humbly enough at Chase Musician's in the late Seventies where he sold Moog, Arp and Crumar, but took a giant leap when he volunteered to drive the Fairlight designer Peter Vogel and his fledgling design from Heathrow to his cousin Peter Gabriel's Ashcombe House near Bath during the making of his third album in 1978.

Stephen got very involved in the sampling sessions there (see Vogel's own pic) and also in the programming of the Fairlight. With Gabriel's help, Stephen set up Syco Systems in spacious premises in Paddington to provide a quiet, comfortable environment for Fairlight demos and sales and the resulting client list reads like a Who's Who of rock'n'roll: John Paul Jones, Geoff Downes, Kate Bush, Trevor Rabin, Thomas Dolby, Nick Rhodes, Alan Parsons, Rick Wright and many more. They soon added LinnDrum and Emulator to their books and further widened their circle of clients. Kevin Monahan of Emu remembers "butlers serving mimosas to Vangelis, Ian Anderson, Thomas Dolby and of course Peter Gabriel" at the Syco launch of the original Emulator. They were also the first operation in the UK to handle PPG.

Syco's discreet approach to technology sales (an entryphone was the only exterior evidence of their presence) prospered and when Emu were without funds to manufacture the groundbreaking Emulator II, Syco provided a loan and received the first run of EIIs in the world. As a result, 'the world', at least in the form of Stevie Wonder and Steve Porcaro, beat a path to their door to buy it from them.

Cheaper versions of the technology like Drumulator and Ensoniq Mirage saw Syco expand into distribution but the AudioFrame was the last product they handled exclusively and took over the development when WaveFrame went bust. Syco was eventually sold to Stirling Audio, with Stephen remaining for a while, but in 1992 he founded a new operation with Nigel Scott named The Tyrell Corporation (after the replicant manufacturers in Blade Runner) offering the same style of service and support to the broadcast and film industries.

When Tyrell was sold to WPP in 1998, Stephen and his wife Kathy (the drummer in Robert Palmer's Addicted To Love video) moved to LA (where Stephen shepherded through the sale of Shake compositing software developers Nothing Real to Apple) and then on to Phuket where he applied his marketing skills to property development for the rest of his life.

Without Stephen's unique vision and approach, it is possible that brands like Fairlight, Emu, Linn, Ensoniq and AudioFrame may not have had anything like the impact they did on the British music of the day and without his sense of humour and style, it is certain that the glory years of sampling technology would have been a lot less fun.  Paul Wiffen

For some lengthier, more personal reminiscences of Stephen's life by this author, please visit Facebook.com/SynthGuruWiffen