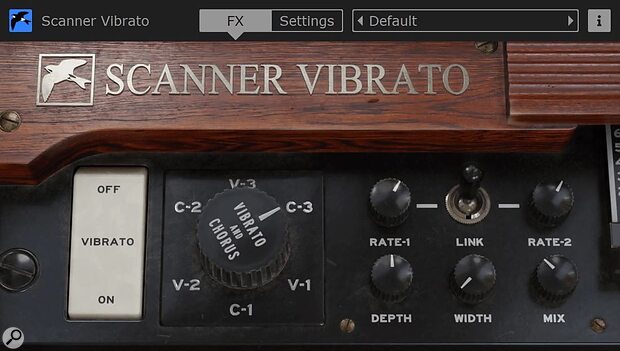 Martinic have announced an update to their Scanner Vibrato plug-in, a software emulation of the chorus/vibrato effect found on Hammond tonewheel organs. In addition to the sonic upgrade provided by the company’s ACE modelling process, the plug-in has also gained some useful new features and graphical improvements.

A Vibrato/Chorus selector allows users to choose between chorus and vibrato modes, with each one offering three effect depths ranging from light to heavy, resulting in a total of six preset effects modes. A pair of Rate controls ranging from 0 to 15 Hz offer control over the chorus/vibrato speed, which provide separate control over the speed of the left and right channels during stereo operation, with different behaviours available courtesy of a Link switch between the two controls and a Width control.

With the Link switch off, the Width control varies from 0% (mono) and 100% (full stereo) where Rate-1 is applied to the left channel and Rate-2 to the right. With Link engaged, the rate for both channels is determined by Rate-1, with the Width control changing the phase relationship between the two channels. A Depth control offers further control over the effect depth, with 0% providing a small amount of chorus or vibrato, and 100% sounding like the emulated electronic contacts need cleaning!

Finally, a Mix control provides a global dry/wet control for the effect when a chorus mode is engaged, with a default setting of 35% providing a typical tonewheel chorus sound. When vibrato presets are in use, the control has a default value of 100% and the position of the knob is ignored.

A newly added Settings panel within the GUI allows users to control every parameter within the plug-in, and also offers some additional functionality. A Model button toggles the plug-in between the previous v1.0.0 and remodelled v1.1.0 versions, with the latter being the default when the plug-in is loaded. A Sync toggle switch synchronises the effect to the tempo of the host DAW, and switches the Rate controls from a number to predetermined time signatures.

The update also brings with it native support for Apple’s M1 processors, and some graphical improvements have been made in the form of HiDPI (and Retina display) support. Custom GUI scaling options have been added to the Windows installer, and a variety of bug fixes have been implemented for both the Windows and Mac versions.

Scanner Vibrato is available now, priced at £30 including VAT. Current users are eligible for a free upgrade, available from the downloads section on the Martinic website.